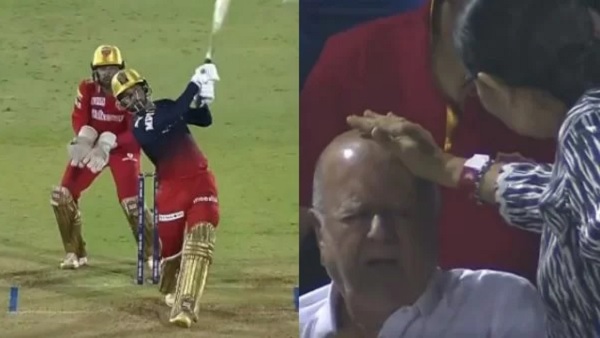 New Delhi.
Royal Challengers Bangalore suffered their sixth defeat of the tournament this season after losing against Punjab Kings in the 60th match of the Indian Premier League (IPL) 2022. During the match, RCB batsman Rajat Patidar hit a big six off Harpreet Brar, which went through the spectators sitting in the stadium. But this six of Patidar went on the head of an elderly fan.

Fortunately, the fan looked fine and a woman was seen taking care of him. The incident happened on the fourth ball of the ninth over when RCB were chasing a big total for three wickets and needed to move on. Patidar hits a brilliant six towards long-on field. This six was 102 meters. However, the unfortunate Patidar’s shot went to the elderly, whose video is becoming very viral on social media.

Also read- ‘I am not such a big fan of speed’, Shami made a big statement about Umran

Meanwhile, chasing a mammoth score of 210, RCB needed to build a big partnership but that didn’t happen and they kept on losing wickets on a regular basis which eventually led to a big loss. RCB batsmen could only score 155 runs for the loss of 9 wickets. Earlier, Jonny Bairstow played a brutal 29-ball 66 which helped Punjab post a big total. Liam Livingstone scored 70 runs in 42 balls.

With this win, Punjab have moved up to the sixth position on the points table with six wins from 12 matches and two wins from here in the remaining matches could increase their chances of making the playoffs. Punjab will next face Delhi Capitals in a crucial match on 16th May at Dr. DY Patil Sports Academy, Navi Mumbai.

‘He can be the captain of CSK for a long time’, Sehwag said – Dhoni has all the qualities in him

‘If I had been a selector, I would have definitely included Dinesh Karthik in Team India for the T20 World Cup’