VIDEO: Why woman sweeper performs duty by tying her child on the back, know the heart touching compulsion of Lakshmi
Advertisement 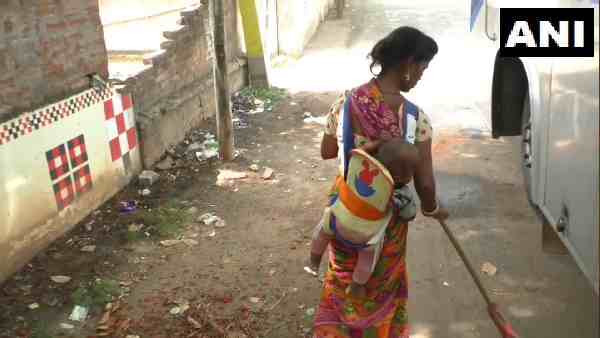 In Mayurbhanj district of Odisha, social media is saluting the spirit of a mother. The matter is of Baripada Municipality. Where a female sweeper named Lakshmi is engaged in performing her duty by tying her innocent child on her back. A video of her is going viral, in which she is seen cleaning the streets, along with taking the responsibility of being a mother. The biggest thing is that the social media is surprised to see the style of Lakshmi Mukhi, while for that mother herself, nothing big is visible in it. She is saying that I am alone and cannot leave the child alone in the house. He doesn’t have any problem with it.

I am alone in my house – Laxmi Mukhi

When Lakshmi Mukhi was asked a question about her performing the duty in this way, she said, ‘I have been working in Baripada Municipality for the last 10 years. I am alone in my house, so I have to work with my child strapped on my back. For me it is not a problem, it is my duty. Lakshmi has explained in a few words how she is simultaneously fulfilling the responsibility of her work and is also fulfilling the full duty of being a mother and she does not want to blame anyone for this.

‘If there is a problem, we will support it’

Baripada Municipality officials say that Lakshmi Mukhi has to do this due to personal reasons, but the municipal workers have been asked to take care of her. According to Badal Mohanty, chairman of Baripada municipality, ‘Lakshmi Mukhi is our sweeper. Due to some personal reasons, she keeps her child with her and does her duty every day. I have instructed my officers to take care of his needs, if there is any problem then we will support him.

But, people are reacting differently to this spirit of Lakshmi on social media. A user on Twitter wrote, ‘This is not a heroic job… but it is heart wrenching! The child is tied on the back in the hot sun, all the dust and smoke is being inhaled… Every child deserves a clean, nurturing and comfortable life. Children’s organizations should take care of the child when she earns something to live.’

‘This is the condition of poverty in our country’

Another user wrote, ‘This is the condition of poverty in our country. Instead of blaming the government, start helping such people around you. Accusations have been and will continue for 70 years. Upliftment of poor people should become a ‘Jan Andolan’. Start around now.’ Another user wrote on Twitter, ‘Go to states like Odisha and Jharkhand and even some parts of North East. It is very common that mothers take their children in this way and even work in the fields… it is very natural.

Everest Day: What is the secret of the camera lost on Everest? History will change as soon as it is found