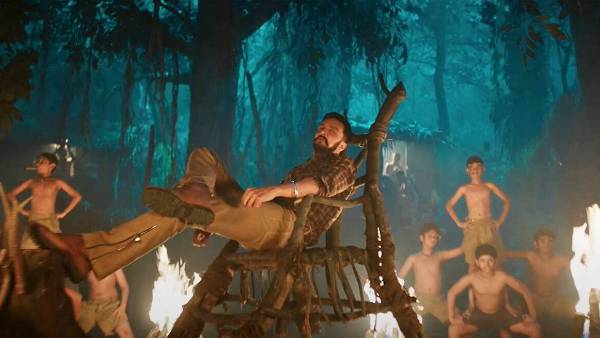 “Ghungroo ki jhankar will start the Holi of blood, such village people say sir”, warns the constable of the police post to Vikrant Rona (Kiccha Sudeep), who came as a police officer to a village nestled in the middle of a dense forest. The story takes place over a span of 28 years. When murders take place in a strange way in a remote village in the middle of a dense forest. According to the villagers, these killings are being done by Brahmarakshas. At the same time, police officer Vikrant Rona arrives in the village. As his investigation progresses, a mysterious game begins to unfold, where everyone in the village is a potential victim and everyone is a suspect.

The director sets the mood of the film from the very first frame. There is suspense, thriller, action and emotion. There are some scenes in the film when you close your eyes with fear. Especially the way the story is shot in a dark setup, it is interesting. The theme of the film is good, but still the film has some major drawbacks, which you cannot ignore.. like the pace and direction of the story. The story moves so slowly in the first half that you lose your focus from the film. The film seems to be running in many directions. The story picks up a bit in the second half and something interesting happens in the last 30 minutes. It begins with a children’s fantasy world and then turns into a supernatural-horror and then a thriller. However, many characters and scenes have been left unresolved, which disappoints.

The film is good on the technical side. It has been released in 3D and Vikrant Rona’s world looks quite appealing on the big screen. The cinematography of the film is good, done by William David. The action sequences are well choreographed. But the film could have been tightened a bit more in editing. The length of suspense thriller films reduces the impact of the story at times. The same happens with Vikrant Rona. By the time the film picks up its pace… it’s too late.

Talking about acting, Kicha Sudeep has done a good job in the character of Vikrant Rona. He has a style, which he has maintained from beginning to end. Be it action or emotional scenes, Sudeep is good in his character. Apart from these, the main characters are Nirup Bhandari and Neeta Ashok, who have done a good job. Nirup’s character has been given a very good arc, which he has done justice to. However, what and why is Jacqueline doing in the film.. This question will definitely arise in your mind too! Even if his character is removed from the film, then there is no difference in the story. Well, the longer she has been on the screen, her energy is good.

Overall, Vikrant Rona starts off on a good note, its climax is quite interesting.. But the almost two and a half hour long story feels quite stretched in the middle. Also, some pointless characters and unresolved scenes significantly reduce the impact of the story. If you are a fan of Kicha Sudeep, then you can definitely watch this film on the big screen. 2.5 stars from Filmbeat to Vikrant Rona.

Tiger Shroff – The reason for Disha Patani’s breakup, one wanted early marriage, the other wanted a career

250 crores is too much for Vicky Kaushal, producer needs a bigger star than Vicky, will be replaced by Ashwathama?