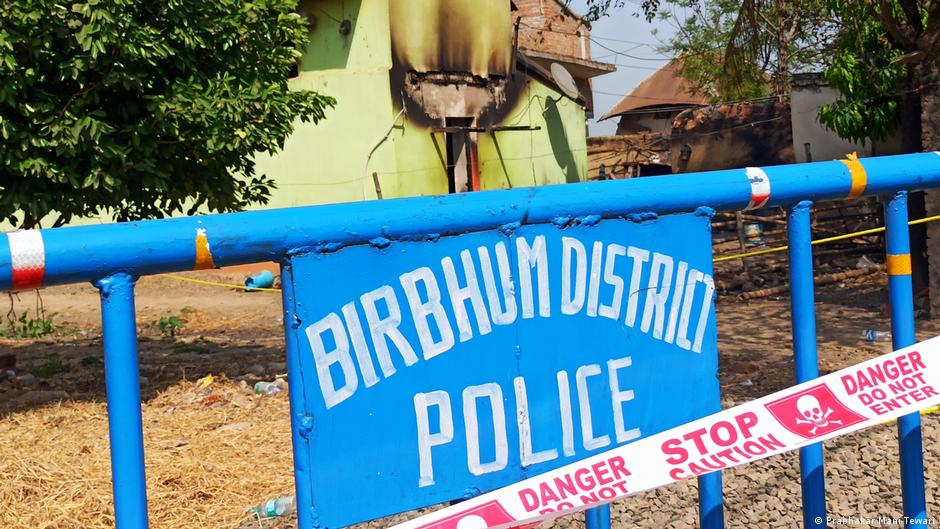 New Delhi, 29 March. The horrific incident that took place last week in the state’s Birbhum district may not quite fit into the spectrum of political violence, but it has emerged as yet another proof of the nexus of politics and crime.

This is the first mass murder in the last decade or so after the Mamata Banerjee-led Trinamool Congress came to power. While this has pushed Mamata and her government on the back foot, it has also given the opposition a strong weapon against them.

This incident is in fact the result of an old and persistent battle for supremacy in state politics, possession of territories and control over earning resources. After this incident, the round of accusations and counter-allegations between the ruling Trinamool Congress and the opposition BJP, Congress and CPM has become very aggressive. Meanwhile, on the orders of the High Court, the investigation of this case has been handed over to the CBI.

what was the incident

On Monday night at around 8.30 pm, some unidentified assailants hurled bombs on the main road near the village and killed Bhadu Sheikh, the Trinamool Congress leader and the deputy head of the local panchayat. Shortly thereafter, some people torched at least 10 houses of Bhadu’s alleged opponents in the village, killing eight. The three people injured in this arson are still swinging between life and death in the hospital.

This incident is different from political violence because all the victims in this case are from Trinamool Congress. Be it Bhadu Sheikh or the people who died in the fire. Children and women are more among the dead.

The people who had fled from the village since Tuesday morning from the very next day of this incident have not been able to return yet. Due to this, there is a feeling of fear and silence in the whole village. Now the number of police personnel stationed there is more than the people of the village. Barricades have been put in place on the way as soon as some go inside from the main road near the village so that no outsider can reach there.

This scene is reminiscent of the scene of Nandigram in Purva Medinipur district some 15 years ago. There too, after the death of 14 people in police firing during the anti-land acquisition movement, the road leading to the area has been barricaded in the same way.

Without visiting these villages, it is not possible to understand its criminal equation and the reason for fear among the people. In conversation with the people around, it has come to the fore that some person from every household of the village was involved in illegal mining of sand and stone. Not only this village, but the economy of many nearby villages is also dependent on illegal excavation and sale of sand and stones.

“The people of Bogatui used to smuggle wood earlier. Now their main business is illegal mining and selling of sand and stone,” says Nirmal Sheikh, sitting at a tea stall in Rampurhat market. He says that all this has been going on for years, whose sticks, on the lines of his buffalo, only the people of the ruling party are involved in this work. The party changes, the faces remain the same. The police and administration remain blind even after knowing everything.

Mamta on the back foot

The first incident of mass murder in Birbhum district during her 11-year rule in Bengal has pushed Chief Minister Mamata Banerjee and her Trinamool Congress government on the back foot. Mamta had paved the way to bring TMC closer to power only by making such incidents against the alleged atrocities of the CPIM during the tenure of the Left Front government, especially after the year 2000. This is the reason that as soon as the information about this incident is received, Mamta has started the exercise of damage control without delay.

On getting information about the incident on Tuesday morning, he sent senior party leader Firhad Hakim to the spot by helicopter and at first sight the two policemen were removed. After that, when Mamta reached the spot on Thursday, she had also brought compensation checks with her. When a victim said that what will happen in this, our life’s capital has also been burnt along with the house, Mamta immediately doubled this amount.

West Bengal has been witness to a long period of violence since the partition of the country. After partition, there has been heavy violence in Bengal over the issue of refugees coming from East Pakistan and later from Bangladesh. The massacre of Bangladeshi Hindu refugees in the Sunderbans area in 1979 is still remembered as the darkest chapter in the history of the state. After that many more such new chapters were added in this history.

In fact, the Naxalite movement that started from Naxalbari in North Bengal in the sixties had given a new dimension to political violence. The voices rising from Naxalbari in protest against the exploitation of farmers had made headlines all over the world during that time.

Also read: Violence escalating ahead of elections in West Bengal

After the Congress government led by Siddhartha Shankar Ray came to power in 1971, the phase of political killings that started, left behind all the earlier violence. This also became the reason for his downfall in the 1977 assembly elections. Violence has been taking place in Bengal even in the seventies to terrorize the voters and to strengthen the hold of the CPM.

Partition, social inequality and the fight for supremacy have led to the fact that even after decades have passed, this state is not able to get rid of it. Violence is spreading like a family feud from one generation to another and from another to the third or from one party to another as a legacy.

Increasing violence after the rise of political parties

History is witness that whenever the ruling party in West Bengal gets a tough challenge from any opposition party, the incidents of violence intensify. This trend has continued during the Left Front and before that the Congress government. In this episode, incidents of violence are taking place due to the challenge and the fight for supremacy to the Trinamool Congress from the BJP.

After the Left came to power, there was a period of political violence going on for a decade. Later the confrontation gradually subsided due to the weakening of the opposition Congress. But after the formation of Trinamool Congress by Mamata Banerjee in 1998, the fight for supremacy started a new round of violence. During the Panchayat elections held in the same year, there was heavy violence in many areas. After that, due to the agitations on various issues including land acquisition in different areas of the state and the increasing activism of the Maoists, the violence also got a boost.

Political analyst Professor Sukumar Ghosh explains, “After the Left came to power, there was a period of political violence for a decade. Later, due to the weakening of the opposition Congress, the conflict gradually subsided. But the year 1998 The battle for supremacy started a new phase of violence after the formation of TMC by Mamata Banerjee in the same year. During the Panchayat elections held in the same year, there was heavy violence in many areas.

Sukumar Ghosh says that after the emergence of TMC, violence was encouraged in different areas of the state due to the agitations on various issues including land acquisition and the increasing activism of Maoists. The situation in which Mamta Banerjee was during that time is now in the same situation as BJP. As a result, the conflict is intensifying.

The interesting thing is that for the violence, all the parties have been putting their shirt in the dock by calling it white from others. In this case, the current Chief Minister and ruling Trinamool Congress President Mamta Banerjee is also no exception. Political observers say that the road to power in Bengal originates from the rural areas. In such a situation, it is the compulsion of the political leadership to give protection to anti-social elements to maintain the ground hold. On the lines of his buffalo, no political party is behind in this matter.

Mamta Banerjee took a jibe at the central government on her visit to North Bengal, told the leaders not to eat Delhi’s laddus

‘All parties should come on one platform against BJP’, Bengal CM Mamta Banerjee’s call to opposition parties