Virat Kohli could have run, but did not take the run, kept the spirit of the game above, honesty won the heart
Advertisement 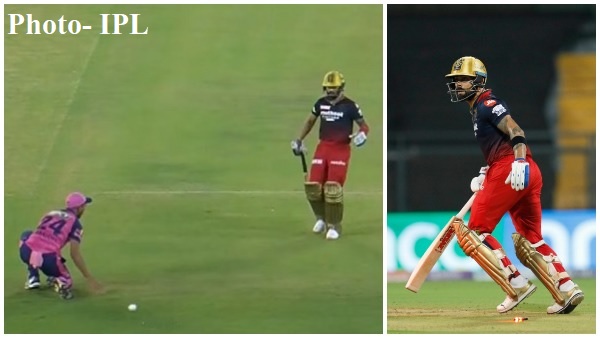 Butler caught the ball and threw it towards the non-striker’s end.

Virat Kohli and Faf du Plessis opened the innings and the match was being played on the new pitch of the Narendra Modi Stadium. Both the teams entered this delicate match with the same playing XI in which they played the last match. On the second ball of the first over, Kohli played towards square leg and stole 1 run quickly. Then Trent Boult was bowling and Jos Buttler was in the fielding position who caught the ball and threw it towards the non-striker’s end.

Although Kohli had reached the crease very comfortably and the ball hit his pad and went towards long off, Kohli made sure that he would not take any overthrow and this showed his sportsmanship once again . Let us tell you that in the rules of cricket, if the ball hits the feet of the running batsman and goes somewhere else, then that batsman can also take runs if he wants. It is generally considered against the spirit of the game but we have seen players stealing runs on delicate occasions.

More confidence in scoring honest runs with the bat

But Kohli proved that sportsmanship is above him and he will be more confident in scoring honest runs with his bat. However, Kohli’s poor form continues and he bid farewell in the last innings of this season after scoring 7 runs off 8 balls, he was dismissed by the famous Krishna. There were high hopes from Virat Kohli after scoring an unbeaten half-century in his last league match but he again flopped in the playoff matches.

RCB lost the final between RR and GT

In this match, while batting first, RCB scored 157 runs for the loss of 8 wickets in which Rajat Patidar again contributed well and scored 58 runs in 42 balls. In reply, Rajasthan Royals chased down the target in just 18.1 overs as Jos Buttler was in a different position as he smashed an unbeaten 106 off 60 balls which included 10 fours and 6 sixes. With this victory, the final clash between the teams of Rajasthan Royals and Gujarat Titans to be held on May 29 has been confirmed. Rajasthan Royals will play the final match for the second time, while Gujarat Titans has reached the final in its very first season. This match will also prove to be an interesting competition between the two young captains.

Mother was sick thousands of miles away, son gave his life to win Rajasthan, Sangakkara revealed

Jos Buttler set a flurry of records in Rajasthan’s victory, not 1, 2 or 3 … made so many records