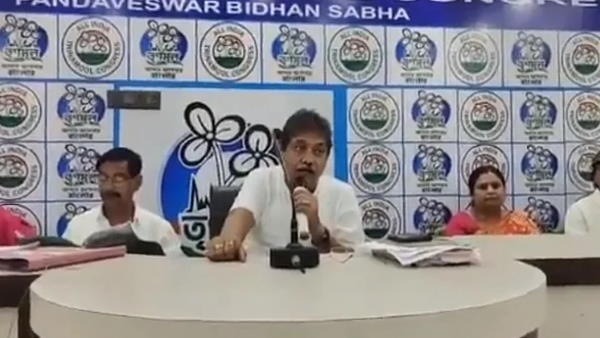 Kolkata, March 29: In the West Bengal by-election, the Bharatiya Janata Party has accused TMC MLA Naren Chakraborty of threatening voters. BJP IT cell chief shared a video of Naren on Twitter. In this, Naren is saying that voting for BJP will bring bad results. Malviya shared the video and demanded action from the Election Commission.

Sharing the video, Amit Malviya wrote, ‘Pandaveshwar MLA Naren Chakraborty openly threatens BJP voters and supporters, saying that do not come out and vote, or else you will have to face the consequences. Such criminals should be behind bars but in Bengal Mamata Banerjee gives them protection. The Election Commission should look into this.

In the video, TMC leader Naren Chakraborty, speaking in Bengali, is asking BJP supporters not to vote. They are saying that if you don’t vote for BJP, it will be easy to do job or business in the state and TMC will support them.

TMC’s Pandaveswar (Asansol) MLA Naren Chakraborty, is seen issuing open threats to BJP voters and supporters, asking them not to come out and vote, or else face consequences. Such criminals should be behind bars but in Bengal Mamata Banerjee patronises them.

Elections being held in Bengal on two seats

‘All parties should come on one platform against BJP’, Bengal CM Mamta Banerjee’s call to opposition parties