Warner himself did not score a century, won everyone's heart by saying this to Rovman Powell
Advertisement 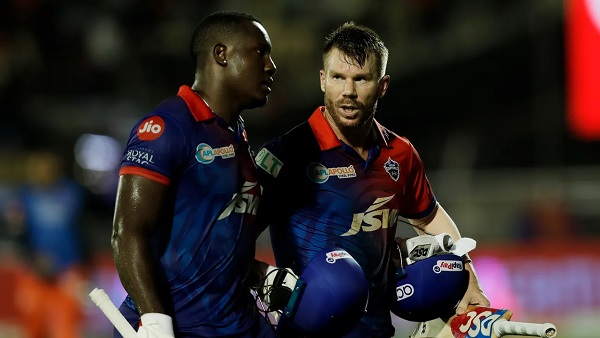 Mumbai : In the 50th match of the Indian Premier League (IPL) 2022, Delhi Capitals made 207 runs for the loss of 3 wickets while batting first against Sunrisers Hyderabad. During this, the havoc of Rovman Powell was seen, who helped the team to cross 200 by raining sixes. Although apart from Powell, opener David Warner also played a brilliant innings, but he could not complete the century. At the same time, Powell revealed after the end of the innings that Warner himself did not complete the century.

Warner scored an unbeaten 92 runs in 58 balls with the help of 12 fours and 3 sixes. The last over of the innings was left, but Powell had the strike. Warner could have completed the century if Powell had sent Warner up with a single, but Powell explained that Warner told him to hit every ball and didn’t care about his century. Powell said, “I was trying my best. I wanted Warner to score his century, but he told me to hit as much as I could and Warner didn’t care about his own century. This sportsmanship of Warner did a heart-winning job.

Powell said of his explosive innings, “Sometimes you plan on the ball, whether it is a slow or a yorker, but the pitch is so good that the ball was coming well. I had a conversation with Pant a few days back in my hotel room, he asked me where I wanted to bat, I asked him to just trust me. I have improved my game against spinners as well as fast bowlers, want to give myself a chance, play some 10-15 deliveries and then play shots. The wicket is very good, but the opposing team is also strong. 207 is a very good score and we have faith in our bowlers to defend this score.

Let us tell you that Powell made his first IPL fifty in just 30 balls. This time Powell came to bat at number five. He scored an unbeaten 67 off 35 balls, which included 3 fours and 6 sixes. Powell also hit Umran Malik for three consecutive fours in the last over of the innings. He also hit a six, as well as taking a single run, taking 19 runs in the over, took the team’s score to 207.

Umran Malik bowled the second fastest ball in IPL history, know whose name is on the first position