WB: Babul Supriyo took oath as MLA of Ballygunge but Dhankhar did not agree
Advertisement 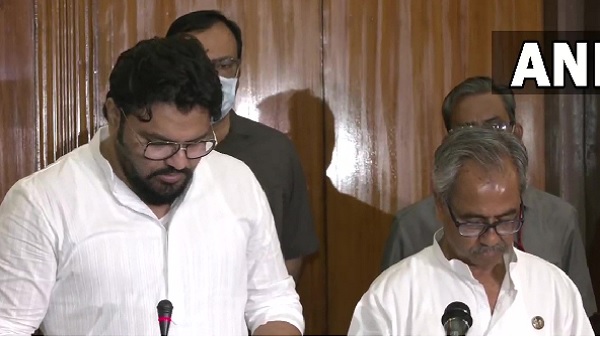 Kolkata, 12 May. Finally, Trinamool Congress leader Babul Supriyo took oath as an MLA of the West Bengal Legislative Assembly on Wednesday. He was administered the oath by Vice President Ashish Banerjee. Let us tell you that Babul Supriyo, who left BJP and joined TMC, has been elected MLA from Ballygunge assembly seat in the by-election held in April.

Governor Jagdeep Dhankhar had nominated the Deputy Speaker of the Legislative Assembly to administer the oath, there was a lot of protest against his decision, but Dhankhar had said that he would not change his decision in any case, nor did he change it. For the time being, this dispute ended as soon as Babul Supriyo took oath.

Dhankhar did not listen to Supriyo

In fact, usually the Governor nominates the Speaker to administer the oath to the new members of the Legislative Assembly, but this time the Deputy Speaker was nominated by Dhankhar, on which Babul Supriyo had demanded that he be sworn in from the Speaker itself, but Dhankhar did not listen to him. Heard.

Let us tell you that Babul Supriyo defeated his nearest rival Saira Shah Haleem of CPI(M) by a margin of 19,904 votes in the Ballygunge assembly bypoll. This seat was vacant after the death of TMC minister Subrata Mukherjee and when Babul Supriyo, who left BJP and joined TMAC, was made a candidate by CM Mamta, everyone was surprised but his decision proved right and Supriyo was on TMAC ticket. MLAs were elected from here. There are speculations that now he may join Mamta Banerjee’s cabinet.

This is the victory of Maa, Mati, Manush: Supriyo

At present, on her victory, Babul Supriya had said that ‘It is the victory of Maa, Mati, Manush, people like the leadership of Mamta Banerjee, under her leadership, good things are happening in the state and I think Bengal will continue in the same way. Will keep moving forward. My entire focus is on the development of Bengal and I will continue to strive for it. I thank the public for trusting me.

He was administered the oath by Deputy Speaker of West Bengal Legislative Assembly Asish Banerjee. pic.twitter.com/9j3N9SWDzt

‘These issues will break the country’, said Sanjay Raut on the issue of Gyanvapi Masjid