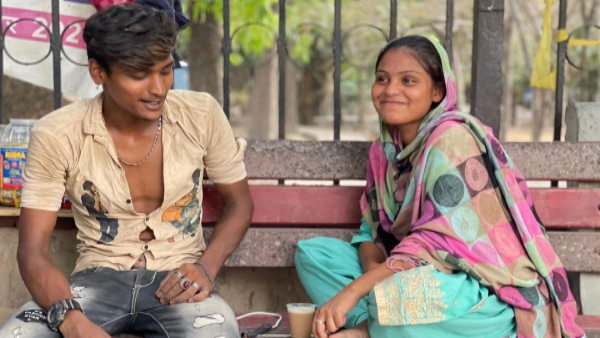 This is the love story of 21 year old Afzal and 19 year old Sabina. These pictures of Afzal and Sabina are from a tea shop in Sarai Kale Khan, Delhi. In the pictures, the boy is wearing black jeans with a brown shirt while the girl is wearing a salwar kameez. Both are fond of tea. So after finishing the work, he reached the handcart to drink tea. But instead of drinking tea in different glasses, both are sharing tea in the same glass.

Parents were not in favor of this marriage

When Afzal was asked about it, he said that, we like to drink like this. The same Sabina said that, we like each other, so we drink together. Not only this, Afzal and Sabina always eat food in the same plate. The couple told that they got married a year ago. Sabina told that, her parents were not in favor of this marriage. The reason for this was that Afzal is a daily wage labourer. However this is not the real reason. They protested because they had known each other since childhood.

This love story started in the winter of 2019

Afzal told that, their affair started in the winter of 2019. when she went to the market. At the same time, both of them gave heart to each other. Lovers like many qualities in each other. Sabina says about Afzal: “Her hairstyle is very nice … I like the way she talks. About Sabina, Afzal said, where to start? She has a very good nature. I like it That she always wears a scarf.

After marriage, Afzal and Sabina started a new life together in a rented room. The rooms of both of them are near the houses of their parents. Sabina explains that, every evening, after Afzal returns home, he helps me cook dinner. “He works during the day, and yet he also works at home to make life easier for me. Although there are many fights between this couple too. She doesn’t listen to me well,” Afzal said. Sabina also says the same thing.

This love marriage happened in the park

One year of married life has changed the lives of both of them. Afzal told that “I have become more responsible, more hardworking. I earn only Rs 300 a day… you can’t run the house on that… I have to work harder. At the same time, Sabina jokingly says that “Now I will not have to face my mother’s scolding. Afzal told that, both of us got married in a park. The ceremony was attended by friends and relatives. A Qazi Sahib conducted it. In the feast, the guests were fed Pepsi and white rasgulla. Meanwhile, both of them run out of tea and they leave for their house.