New Delhi, May 18:
AIMIM chief Asaduddin Owaisi is constantly attacking BJP over the Gyanvapi Shivling issue. This time the target of Owaisi was not the BJP but the Congress. Owaisi on Wednesday hit out at the Congress after Gujarat working president Hardik Patel resigned from the party. He said that the Congress ruled Maharashtra for 15 years, but now it has become the number three party, whereas it is nowhere to be seen in Delhi. His people are leaving. Hardik Patel had no faith in the unofficial president and left the party. 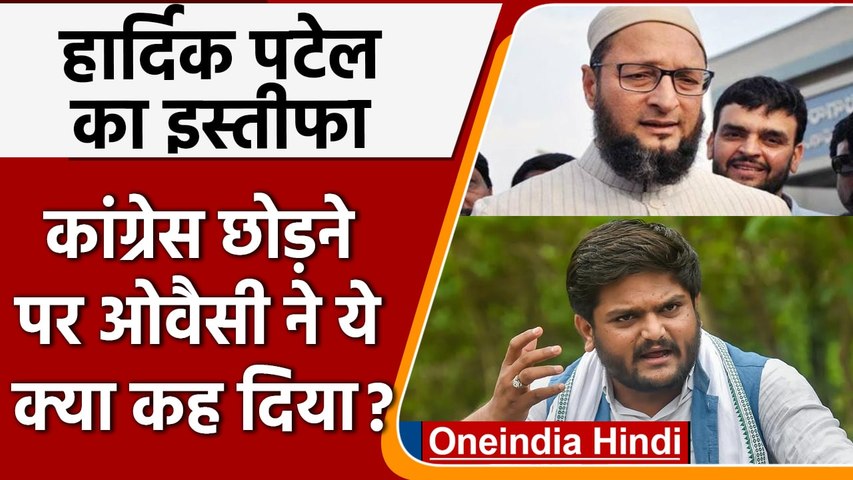 Hardik Patel on Wednesday announced to quit the Congress on Twitter. He wrote that today I courageously resign from the post of Congress party and primary membership of the party. I am sure that my decision will be welcomed by all my colleagues and the people of Gujarat. I believe that after this step of mine, I will be able to work really positively for Gujarat in future.

Owaisi said that the fountain was not found in the Gyanvapi Masjid premises. Referring to the Supreme Court’s decision, he said that Muslims are allowed to perform religious observances, which means that we can perform Wudu there. This is a fountain. If this happens then all the fountains of the Taj Mahal should be closed. He said that the BJP wants to take the country back to the 1990s when riots took place. He said such fountains are in every mosque. Denying the claim of getting Shivling, Owaisi has also released a video. In the video, Owaisi told that it has been told by the Masjid Committee that the mosque had a fountain, not a Shiva Linga. Every mosque has a fountain, he said. Owaisi said, the commissioner appointed by the court did not claim the Shivling in the court. But the lawyer for the Hindu side went to the court and claimed to have found the Shivling. On this, the court ordered the sealing of that place. This order is against the 1991 Act made in Parliament. He said, if Shivling was found in the mosque, then the commissioner of the court should have told this.

On the other hand, the picture going viral on social media has also been confirmed by SM Yasin, Joint Secretary of Anjuman Intrageniya Committee. He told that this is a picture of the same place, which has been promoted as Shivling. He told that it is the fountain. This fountain is being told as Shivling on behalf of the people of Hindu side. The Muslim side says that in the mosques of the Mughal period, there has been a tradition of putting a fountain inside the Wuzu Khana. A stone of the same has been found in the survey today, which is being told as Shivling. The Hindu side had claimed to have found Shivling, advocate Deepak Singh has claimed that ‘this was the survey of the third day….a stone was found, we are claiming that it is Shivling. It is about 3 feet high. This is the place where Muslims perform Wudu.

What did Hardik Patel say to Congress, and what did he say