What is a Hydrogen Car? Riding on which Nitin Gadkari reached Parliament
Advertisement 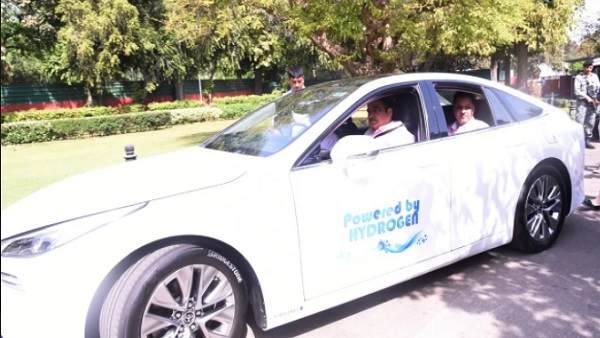 Toyota has given a car to Gadkari

Let us inform that Nitin Gadkari launched the country’s first hydrogen powered advanced fuel cell electric vehicle Toyota Mirai this month. Nitin Gadkari also shared a video and told how a car can run with green hydrogen. At the launch of the car, Gadkari said Green Hydrogen is a better and environment-friendly one. With this, the country can become self-reliant in the field of energy. Nitin Gadkari himself told that he will use hydrogen car. Japan’s Toyota company has given me this car which runs on hydrogen. I myself will be using it as a pilot project.

Hydrogen is made from water

Nitin Gadkari had said in Parliament that now the day is not far when we will run the car with green hydrogen. Green hydrogen is made from water. He said that now soon we will move towards this option. Gadkari said it can be made using sewage water. I sell the sewage water of my parliamentary constituency to the Maharashtra government, from which we get royalty of Rs 325 crore every year. Using this water, we can make green hydrogen. This hydrogen will be the cheapest fuel and pollution will also be less. PM’s wish is that we should become exporters and not importers of petroleum.

Gadkari often talks about green fuel, not only that he said that rapid progress in green fuel technology will bring down the cost of electric vehicles (EVs), in two years’ time the cost of petrol-powered vehicles should be at par with EVs. Will go It is worth noting that today the price of petrol and diesel has increased once again, this is the eighth increase in the last 9 days. Talking about the price of petrol in the country, petrol in Delhi is Rs 101.01 per liter, diesel is Rs 92.27 per liter.

To win the elections, BJP had reduced the prices of petrol and diesel, now they are telling lies- Mallikarjun Kharge