What is the meaning of this 'red diary' in the governance of Punjab?
Advertisement 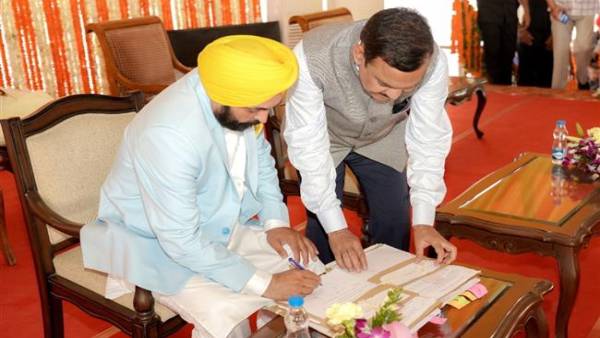 Even the Chief Minister of the same party does not trust the officers of his predecessor CM. When Charanjit Singh Channi became the CM after the resignation of Captain Amarinder Singh, he replaced the Chief Secretary. But now Chief Minister Bhagwant Mann has given a stern warning to the officers who have devotion for a particular party. He has said, I do not keep a red diary like in the earlier regimes. I have only one green diary which details the new action plans of the government. Like the Red Diary keepers, I will not do anything out of political vendetta. All officers should work honestly without any pressure. Honesty is the first condition as a public servant. There is no place for corrupt officials in this government. Strictest action will be taken against them. That is because the people have chosen the Aam Aadmi Party government only to fulfill their expectations. Therefore, the first priority of the government is to serve the people. Honest bureaucracy is necessary because the responsibility of implementing whatever the government plans will be on the officers. The success of the government’s policies depends on their efficiency. Therefore, the officers of civil service and police service have to respect the public interest.

What is this ‘red diary’?

In March 2018, Sukhbir Singh Badal had held a rally. In this rally, he had waved a red diary and said, “Look at this red diary, I am writing in this the names of the officers who are harassing Akali Dal workers for political reasons.” Governments come and go. Political changes have been taking place in five years. But the officers are always a part of the executive till the time of their service. Therefore, the officers should stay away from political discrimination. They should not work under pressure from any government party. That’s because after five years they will have to give their answers. He had also named a senior police officer of Bathinda in this context. The police officer was accused of registering a false case against an Akali worker at the behest of the Congress government. That is, in Punjab, there used to be a red diary to take revenge on the officers with political commitment. As said by Akali Dal President Sukhbir Singh Badal.

According to a survey in 2019, Punjab ranks sixth in India in terms of corruption. MC Saxena, former director of Lal Bahadur Shastri National Academy of Administration, had said, “The civil servants of Punjab and North Eastern states are the most corrupt across the country. It is alleged that the links of drug and sand mafia in Punjab are related to the officers. In the Khanna drug case in 2021, four police officers including Punjab Police IG Paramraj Singh Umranangal were suspended. During 2017 to 2020, 47 policemen were fired in drug cases. 17 was suspended. How strongly the drug mafia’s web is spread in Punjab, it can be understood from another example. Jagdish Singh Bhola of Punjab had earned a big name in wrestling. He won the title of Bharat Kesari and Rustamye Hind. He also acted in some films. He was awarded the Arjuna Award in 1998 for his remarkable contribution to wrestling. He was reinstated as DSP in Punjab Police from sports quota. But soon drug smugglers caught him in their net.

The year he got the Arjuna Award, the same year he got his respect. In 1998 itself, Jagdish Bhola was dismissed from his job for his involvement in illegal activities. Then he went on the wrong path. In 2013, when Punjab Police raided his house, heroin worth Rs 20 crore was recovered from there. When the investigation of this case started, a drug racket worth about Rs 6,000 crore was exposed. Former DSP Jagdish Singh Bhola was sentenced to 12 years in this case. Akali leader and former minister Vikram Singh Majithia’s name also cropped up in the Bhola drug case. An FIR was lodged against Vikram Majithia in December 2021, eight years after the incident. In the 2022 elections, Majithia also contested from Amritsar East on Akali Dal ticket. Navjot Singh Sidhu was also here. But AAP’s Jeevanjot Kaur defeated both. Now politics has taken a new turn in Punjab. Chief Minister Bhagwant Mann has ordered the bureaucracy to follow a new pattern.

Congress angry at you for sending Raghav Chadha to Rajya Sabha, the leader said – doing so is an insult to the mandate