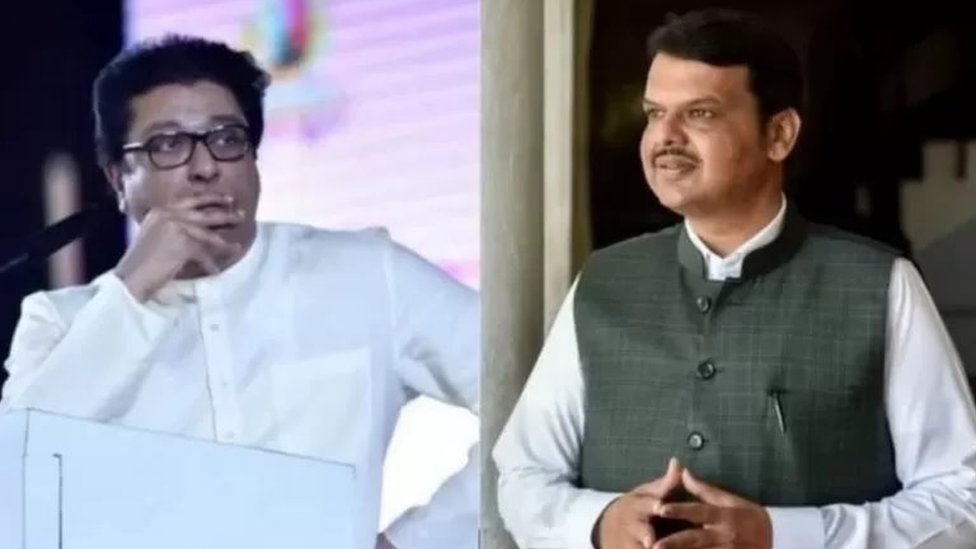 Raj Thackeray has appealed to his supporters to recite Hanuman Chalisa at the time of Azan in front of the mosque.

Raj Thackeray while addressing a rally on Gudi Padwa said, “I am not religiously fanatic but I am proud of my religion. Were there loudspeakers when religion was formed? Have you seen such loudspeakers in other countries? “

Raj Thackeray’s party has only one MLA in the Maharashtra Legislative Assembly. But this statement of his is very much discussed. After his address, state Home Minister Dilip Walse Patil had to make a statement after meeting Chief Minister Uddhav Thackeray that a uniform policy would be implemented regarding the use of loudspeakers at religious places.

why did raj thackeray take u,turn?

Shiv Sena formed a secular government with Congress and Nationalist Congress Party, after which Uddhav Thackeray became the Chief Minister of the state in 2019. After this, the aggressive Hindutva politics that Shiv Sena had been doing with Marathi identity seems to be empty.

Raj Thackeray is trying to somehow make his party relevant, so he is seeing this opportunity. He wants to fill the vacancy due to Shiv Sena joining the secular government.

At the same time, the old alliance of BJP and Shiv Sena also broke down. Raj Thackeray now wants to replace Shiv Sena as a junior partner of BJP.

This is the reason why Raj Thackeray has stopped speaking against North Indians and changed his party’s flag to a saffron flag. In fact, in the next few months, municipal elections are to be held in big cities of the state including Mumbai. These elections were postponed in the circumstances arising after the implementation of OBC reservation in local elections.

Raj Thackeray’s party is 16 years old and so far only speaks on Marathi issues. Raj Thackeray’s supporters and workers have targeted Hindi speaking people in the state several times. But this did not strengthen it politically, so now the party wants to resort to Hindu versus Muslim polarization.

However, Maharashtra Navnirman Sena claims that this is not a U-turn. Party leader Sandeep Deshpande said, “We are not afraid to criticize Narendra Modi when we think he is wrong. But when we think he is right, Raj Thackeray has been praising him. How did the U-turn happen?”

Senior journalist Sudhir Suryavanshi said, “Shiv Sena was formed for the purposes of Marathi population, it also got support in Mumbai. But the party could not move beyond Mumbai, Thane and Konkan. Then from 1984 onwards Shiv Sena has formed Started the politics of Hindutva and the party started growing rapidly. Raj Thackeray is trying to adopt the same path.”

Sharad Pawar’s party has also celebrated Hanuman Jayanti along with Iftar. Sharad Pawar’s daughter and party MP Supriya Sule has posted pictures of her Hanuman temple on social media. Sharad Pawar has also clearly said that he is not an atheist.

BJP is helping Raj Thackeray without any noise, so that the difficulties for Shiv Sena increase. A BJP leader said that he will provide loudspeakers to those Hindus who want to install loudspeakers in front of the mosque. Raj Thackeray’s morale has increased due to unexpected support on this issue. They are planning to hold two-four more rallies outside Mumbai in the coming days. Due to this, the political turmoil regarding Hindutva is expected to continue in the coming days.

This is not the first time that loudspeakers on mosques have become a political issue. Shiv Sena and BJP had been raising questions about this in the past as well. However, even during Hindu festivals, questions have been raised about the loud noise of loudspeakers.

Sumaira Abdulali of Awaaz Foundation, an organization fighting to reduce noise pollution in Mumbai, told BBC Marathi, “Leaders know that if the use of loudspeakers is banned during Azan, it will have to be banned during the Ganesh Chaturthi festival as well. .No one wants to stop using it. That’s why they only criticize each other. When they are in opposition, they talk about Azaan and loudspeakers, when they come to power, they do nothing.”

Nashik Police Commissioner Deepak Pandey has issued an order that before May 3, according to the rules, all religious establishments should get permission to use loudspeakers, the matter of action against those who violate it is also included in the order.

Talking to the media, Deepak Pandey said, “We have taken this decision so that there should be peace with law and order. These orders have been given under the Maharashtra Police Act 1951. If it is violated, we will take action as per rules.” The rules will apply uniformly to all religious places. Permission will be required for use of loudspeakers in temples, mosques, gurdwaras and church premises. No one has taken permission yet.”

The Nashik Police has also said that there is no difficulty in reciting Hanuman Chalisa but it should not be within 100 meters of the mosque and during the time of Azan.

Uday Warunjikar, advocate of the Mumbai High Court and member of the Maharashtra Goa Bar Council, says, “Some provisions have been made regarding noise under the Environment Protection Act, 2000. These provisions are also applicable to religious places. You can allow the use of loudspeakers from 10 am to 6 am. The government can give this permission during any festival or rally.”

According to Uday, “On the use of loudspeakers, the concerned organization will have to see that the fixed decibel limit is taken care of, if the noise exceeds that limit, there can be a police case against the user and the loudspeaker provider”.