When Taimur picked up younger brother Jeh in his lap, the faces of both of them looked like this
Advertisement 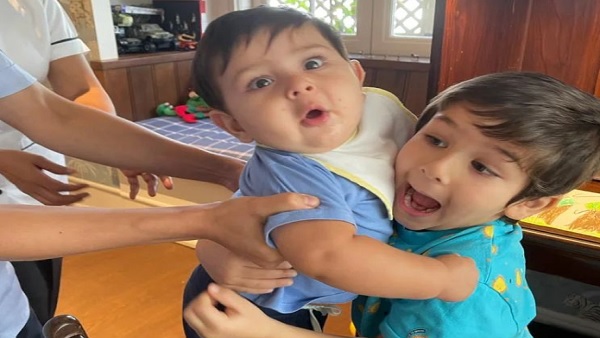 Mumbai, May 18: Along with the actors in the Bollywood industry, their children also have a different sway. Star kids are also very popular in the industry. Be it director Mahesh Bhatt’s daughter Alia Bhatt or actor Chunky Pandey’s daughter Ananya Pandey. Many star kids have started hitting the limelight since childhood and both the sons of actor Saif Ali Khan and actress Kareena Kapoor are currently at the forefront of this race. If we talk about the last few years, then many stars have debuted in kids films and some are all set to debut. At the same time, the children of some celebs are still small, but their cuteness tells something else. People are in awe of her bubbly and naughty acts and her pictures are making a splash on the internet. Same is the case with Kareena Kapoor Khan’s two sons Taimur and Jeh.

Photo of Taimur and his younger brother Jeh goes viral
Media photographers are always excited to click pictures of Taimur Ali Khan and Jeh Ali Khan. Meanwhile, a photo of both brothers i.e. Jeh-Taimur is going viral on social media, seeing that their fans have become crazy. People are commenting fiercely on this picture of him. In the photo of Taimur Ali Khan and Jeh Ali Khan, which is going viral on social media, the unwavering love of both the brothers is visible. In the picture, Taimur Ali Khan is seen forcibly dragging his younger brother Jeh Ali Khan from Naini’s hands so that she can hold him in her arms. Taimur Ali Khan loves his younger brother immensely and he is clearly visible in this picture too. It can be seen in the photo that Jeh is standing on the chair and Taimur is on the ground. Both are hugging each other. During this, the faces of both are worth seeing. This picture has been shared by Taimur’s aunt Saba Ali Khan on her Instagram account.

Let us tell you that while Taimur has turned 6 years old, his younger brother Jeh is going to be about one and a half years old. Excellent bonding is also seen between the two brothers. Apart from this, you can also see some such videos on social media, in which photographers are clicking Jah’s photos and being the elder brother, Taimur is stopping them and getting angry on them. Seeing this, it seems that Taimur is proving to be a protective elder brother.

Mother Kareena Kapoor is busy shooting
Let us tell you that these days Kareena Kapoor is very busy shooting for her OTT debut film. The shooting of his film ‘The Devotion of Suspect X’ is going on in many areas of West Bengal these days. The director of this film is Sujoy Ghosh. Kareena has also taken her younger son Jeh there many times for shooting. He recently also shared some photos from the shooting set, in which Jeh was also seen with him.

Prithviraj: Not Akshay Kumar but this star was the first choice of the film, know who?