While taking the IPL trophy, Hardik Pandya did something that Dhoni remembered, won the hearts of the fans
Advertisement 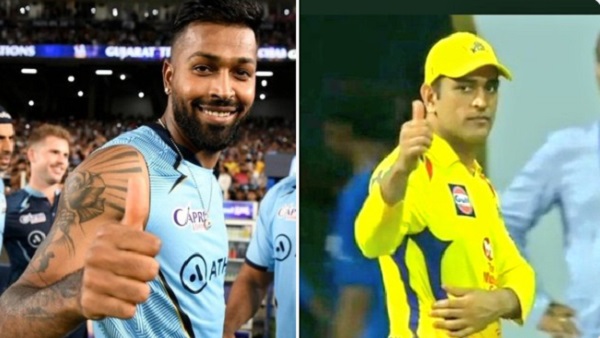 By the way, if we look at Hardik Pandya’s performance and his captaincy in the entire season of IPL, then somewhere the image of Dhoni is definitely seen in him. Throughout the season, Pandya has won hearts with his bowling, batting, fielding and captaincy. In such a situation, during the match presentation after winning the final match, Hardik Pandya did something that reminded everyone of Dhoni.

What was the similarity between Dhoni and Pandya?

In fact, when BCCI President Sourav Ganguly and Secretary Jay Shah were giving the IPL trophy to Gujarat captain Hardik Pandya, Pandya first took the trophy in his hand and then gave the trophy directly to the players of his team. After winning the match, this type of style is often seen only of MS Dhoni. Be it any major ICC tournament or any IPL season, whenever Dhoni has won the trophy, he is seen on the stage with the same style. Often after taking the trophy, Dhoni hands it over to the players of his team and celebrates by himself standing by the side. The same style was seen inside Hardik Pandya today as well.

Let us tell you that Hardik Pandya has been compared to MS Dhoni in this IPL. After making the final, Pandya had also said that he considers Dhoni as his elder brother. Pandya had said that people will only talk. This is their job. I can’t do anything. Hardik Pandya’s name always sells and I have no problem with it. I face it with a smile. Pandya further said that Mahi bhai has played a very important role in my life, he is like a brother, friend and family to me.

Let us tell you that under Hardik’s captaincy, Gujarat team won 10 out of 14 league matches. In all these won matches, Hardik contributed by batting and sometimes by bowling. Throughout the season, Hardik Pandya has scored 487 runs in batting at an average of 44.27. At the same time, he has taken 8 wickets in his name. During this, Pandya has given runs with an economy of 8.75.

This player played throughout the tournament, broke in the final, butler’s heart was filled with heart-wrenching defeat