Who is responsible for the 'destruction' of Congress in Punjab? Sonia Gandhi told this to Ghulam Nabi Azad
Advertisement 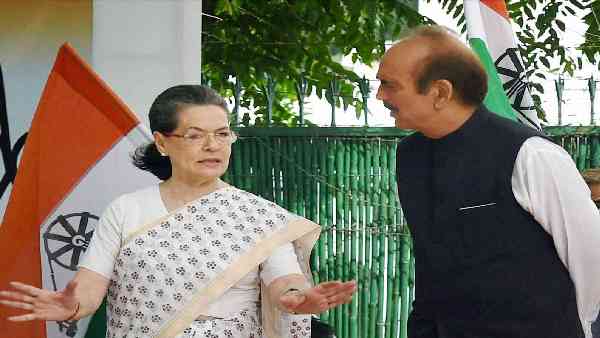 Efforts to save Rahul-Priyanka from being held responsible

Like every time, this time also a meeting was held under the leadership of Sonia Gandhi last week to brainstorm on the defeat of Congress in five states, in which she, being the party president, took full responsibility on herself. But, the helplessness of the Congress leadership has become public with what NDTV has disclosed quoting a party functionary who attended that high-level meeting of Congress. Actually, Congress was in power in Punjab and the matter was being handled directly by Sonia’s son Rahul Gandhi and daughter Priyanka Gandhi Vadra for the last several months. According to the report, the way in which Sonia has directly taken the responsibility of the crushing defeat in Punjab, it is clear that she wants to save her children.

Congress was badly ousted from power in Punjab

A few months before the elections in Punjab, the Congress removed its strong face Captain Amarinder Singh from the post of Chief Minister and got Charanjit Singh Channi crowned in his place. Earlier, Captain’s staunch opponent Navjot Singh Sidhu was made the state president. The Captain had expressed his displeasure against it many times. Rahul and Priyanka are believed to be directly behind all these decisions. However, when the assembly elections were held, the party was not only ousted from power, but its number of MLAs in the 117-seat assembly was reduced from 77 to just 18.

Who is responsible for the ‘destruction’ of Congress in Punjab?

In the presence of more than 60 senior party leaders in the Congress Working Committee meeting, party veteran and former Union Minister Ghulam Nabi Azad dared to ask some sharp questions to Sonia about the plight of Punjab. According to a Congress leader present in that meeting, Azad directly asked who was responsible for the ‘destruction of Punjab’? Who took the decision to replace Amarinder Singh with Charanjit Singh Channi three months before the elections? Who appointed Navjot Singh Sidhu as the state president, who continued to do running commentary on Congress?

It is believed that Azad’s questions were directed towards Rahul and Priyanka, who were also present during the meeting. But, it is being said that Sonia stopped Azad from asking more questions and asked him not to ask such questions or to name anyone. Along with this, she said that she (Sonia) took all the decisions in Punjab and she takes full responsibility for it. According to a Congress source, when Sonia “took the responsibility”, Azad thanked her. Azad is one of the leaders of the G-23 group of Congress, which has been running dissatisfied for the past one and a half years, demanding reforms in the party, but the party has not shown any concrete seriousness towards their demands so far.