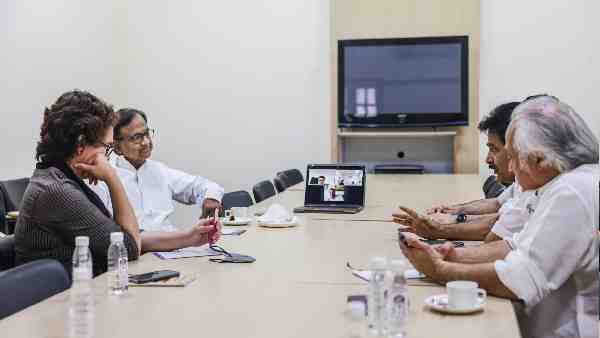 The first effect of the Congress’s Chintan Shivir held in Udaipur, Rajasthan this month has been seen on the ground on Tuesday. The Congress has constituted ‘Task Force 2024’ for the 2024 Lok Sabha elections, with the most shocking name being that of election strategist Sunil Kanugolu, who joined the party sometime back. Apart from these, senior party leaders P Chidambaram, Mukul Wasnik, Jairam Ramesh, KC Venugopal, Ajay Maken, Priyanka Gandhi Vadra, Randeep Singh Surjewala are also included in this 8-member task force.

Sunil Kanugolu, who once worked with election strategist Prashant Kishor, is very reclusive and prefers to stay away from the media. At present, the Congress has entrusted him with the responsibility of preparing a strategy for the upcoming assembly elections in Telangana and Karnataka. The 40-year-old Kanugolu, who did his work in a low profile and professional manner, played a huge role in the victory of the DMK-Congress alliance in Tamil Nadu in the 2019 Lok Sabha elections. However, he has taken the membership of Congress this year. He has also been a part of the founding team of an organization called A Billion Minds.

Work done for Modi-Yogi too

The biggest contribution of election strategy maker Sunil Kanugolu is considered to be in the resounding victory of BJP in the 2017 UP assembly elections. However, he had established a professional association with the Bharatiya Janata Party even before he became an important architect to form the first government of Yogi Adityanath in Uttar Pradesh. Prashant Kishor, in a way, has played the role of his mentor in making the election strategy, who also included him in the election campaign team of Narendra Modi in the 2014 Lok Sabha elections.

Election management may get the responsibility

A Congress leader has indicated that Sunil Kanugolu will have a bigger role to play in the party’s election management team. It is worth mentioning that the party had earlier started a deal to give a bigger role to Prashant Kishor too, but things did not materialise. However, in a statement issued by the party, it has been said that every member of the task force will be given special responsibility regarding organization, communication and media, liaison, finance and election management.

Who has what responsibility in Task Force-2024?

People with knowledge of this say that if Wasnik and Venugopal can be given work related to the organization, then Chidambaram will be put on the task of improving the financial condition of the party. If another leader is to be believed, Jairam Ramesh and Surjewala will handle the Public Relations Cell and Communications Department. Whereas, Vadra, who comes from the Gandhi family, will be an important member of this task force, who will also play a special role in election management. The special thing is that except Sunil Kanugolu, almost all the members have always had the blessings of the Gandhi family.

Hardik Patel furious at Congress over Ram temple, said- what is your enmity with Lord Ram?