Who is Swami Sivananda who bowed down to PM Modi? Reached Delhi to receive Padma Shri at the age of 125
Advertisement 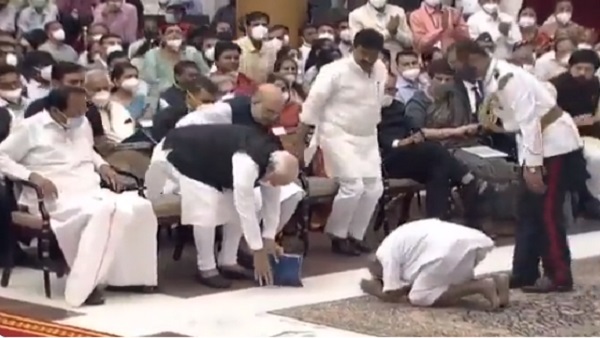 When 125-year-old Swami Sivananda bowed down in front of Prime Minister Narendra Modi, PM Modi also bowed before him in response and not only this, all the dignitaries present in the hall stood from their seats to see this view. After saluting PM Modi, Swami Sivananda also bowed down to President Ram Nath Kovind. After this the President also went ahead and picked up Swamiji and honored him with Padma Shri with great warmth.

Who is Swami Sivananda?

Let us tell you that Swami Sivananda is a resident of Varanasi, the parliamentary constituency of Prime Minister Narendra Modi. He has been awarded Padma Shri for his outstanding contribution in the field of Yoga. Swamiji was born on 8 August 1896 in Haripur village of Silet district, which is now part of Bangladesh. Swamiji later came to Kashi from Bengal. Then he took initiation from Guru Omkaranand and at the age of 29, Swami Sivananda went to London.

Swamiji wakes up every morning at 3 am

For 34 years, Swami Sivananda traveled to America, Europe, Australia, Russia etc. countries. Swamiji says that yoga, pranayama and home remedies are the key to staying healthy. Swami Sivananda wakes up every morning at 3 am and then recites Yogasan and Shrimad Bhagavad Gita.

Another step of CM KCR towards preparing for 2024, said- talks are going on with Prashant Kishor on ‘national change’