Who was the British woman who called Mahatma Gandhi a 'child in politics'?
Advertisement 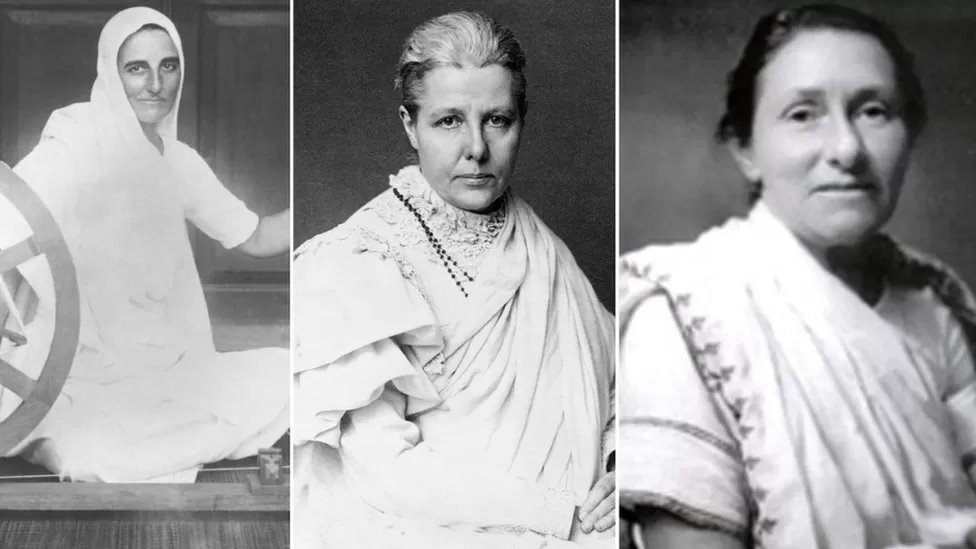 Along with men, many women took part in the freedom movement of India. Among all these women, three such British women are also included, who went against the government of their country and fought for the independence of India.

The first name of these three women comes from Annie Besant, who was an atheist and socialist woman in her own right. But later she became theosophist.

After this comes the names of Madeline Slade (Mira Ben) and Katherine Hellman (Sarla Ben) who joined the movement against the British.

Famous historian Ramachandra Guha has written in detail about these three women in his book ‘Rebels Against Raj’.

Annie Besant had come to visit India on a short trip. But he had no idea that this small journey of his would change in 40 years.

who was annie besant

He gave such lectures on religion and vegetarianism, due to which the University of London refused to give him a degree. This incident made him enter the Indian education sector.

Annie Besant established the Central Hindu College and the residential Hindu Women’s School in Banaras in 1904 with the help of the King of Kashmir and Banaras.

Balmohan Das, president of the Center for Gandhian Studies in Andhra Pradesh and former vice-chancellor of Nagarjuna University, says that this was a revolutionary step in terms of the social and economic situation of that period.

Annie Besant emphasized on mixing modern education with traditional Indian methods. She was in favor of gender equality but insisted that the status of men be higher than that of women.

Historian Ramchandra Guha says that she had a feeling of hatred towards Mahatma Gandhi, but Mahatma Gandhi always looked at her with reverence.

This special relationship between the two is reflected in an event held at Banaras Hindu University where Annie Besant had stopped Mahatma Gandhi from giving a speech during a public event.

During his speech, Gandhi lashed out at the patrons of the university, saying, “Was there a need to dress up like this on the occasion of this event? Was it necessary to empty the jewelery boxes to show true loyalty to our king and emperor? Was there a need to be adorned from head to toe? We can’t have swaraj here?”

After this the Raja of Darbhanga intervened and asked Gandhi to leave the program immediately.

read this also – When Mahatma Gandhi himself narrowly escaped being lynched

Annie Besant was arrested by the British government for her provocative statements. But people protested against his arrest and in 1917 he was released from prison.

After this, Annie Besant was elected as the first woman President of the Indian National Congress in the year 1917.

Professor Balmohan Das says, “Annie Besant had clearly told the British government that India was determined to be independent.”

“She did not take part in the Swadeshi movement and even asked the boys of Hindu college not to participate in this popular movement. She had great devotion to Hinduism as well as devotion to the British Empire and this thing She was very careful not to openly develop a sense of separatism and independence among her disciples.

read this also – Is it a crime to read ‘War and Peace’?

Annie Besant was in favor of giving women the right to vote in India. Before a parliamentary committee in England, she had said that the abrogation of women’s suffrage would harm India’s ambitions and hopes.

She had also said that Indian women needed the right to vote more than English women. The media also criticized him for his stand.

And his hatred towards Gandhi continued. There were differences between them, from the village committee to the Congress representatives and the use of Khadi. His stand was against Gandhian policies.

Once while talking with his friend, he said that “Gandhi is a child in politics. He is roaming in a world which he does not understand and is dreaming in the same world”.

However, Gandhi always had respect for him considering his age and experience. He once said that I have placed my petitions before him like a boy puts before his mother.

Annie Besant said goodbye to this world on 20 September 1933.

On his death, Mahatma Gandhi wrote, “The way Annie Besant has served this country, it will be mentioned in the history of India as long as this country remains. Her memories will live on in the hearts of the people. Having accepted and devoted himself to it.”

Born into an aristocratic family in England, Madeline Slade was interested in horse riding and Beethoven’s music.

But he left the luxurious life of his family and made India his home. Gandhi adopted her as his daughter and changed her name to Mira Ben.

Mira Ben came to know about Mahatma Gandhi from the French writer Romain Rolland. After this she started reading Gandhian policies and literature related to India.

The moment he decided to come to India, he stopped eating non-vegetarian food and drinking alcohol. She started sitting cross-legged on the ground and started learning Hindi.

After this Mira Ben came to India in 1925 when she was about 33 years old.

She vowed to follow celibacy as soon as she started wearing a sari and got her head shaved.

But when she reached her forties, she was attracted to Prithvi Singh, a revolutionary who had come to the ashram.

Gandhiji asked Mira Ben to marry Prithvi Singh if he wanted. But she was not ready for it.

Taking care of Mahatma Gandhi’s health, Mira Ben used to check his BP along with giving him fruits and goat’s milk. Along with this, she also took care of his spinning wheel.

Balmohan Das says, “She did not leave Bapu alone for a moment and used to claim his rights. There was a kind of selfless relationship between the two.”

Seeing Miraben’s rightful behavior towards herself, Gandhi sent her to travel all over the country for the promotion of Khadi. She also went to jail during the Civil Disobedience Movement.

Mira Ben had said in an interview to the New York Times that Gandhi’s arguments are not based on ideology but on logic. He had said, “He was no Mahatma.”

There was also a lot of discussion between him and Gandhi regarding the observance of celibacy among married couples.

One of Gandhi’s most controversial views was that married couples should practice celibacy while living in the ashram, although having children was allowed. Mahatma Gandhi was following it for years.

Letter to Nehru on increasing corruption

The British could not digest the fact that a British woman was following Gandhi and was sent to jail.

However, she could not stay in India after Gandhi’s death. He also wrote a letter to Nehru and told about the increase in corruption in India. And in 1959 she moved to Vienna.

The Government of India honored him with Padma Vibhushan in the year 1982. He died in the same year.

read this also – Gandhi @ 150: Gandhi was better than the new rulers

Sarla Ben once said that “There is no colour, race and politics for humanity. If the government wants to punish those who fight for the right cause, then I have nothing to say. Those who protest in difficult times They should also be ready to face the consequences. When people around me are suffering from disease and poverty, I cannot sit in the ashram. I would rather listen to my conscience than listen to the British government.”

This statement was given by a British woman to the government when she was helping people fighting against British rule.

It was Katherine Marie Hellman better known as Sarla Ben. Catherine was born in London in 1901, studied history, geography, French and German.

Sarla Ben had heard about Gandhi from Mohan Singh Mehta, an Indian officer working in Britain, after which she came to India. He also made India his home and understood Gandhi and his policies.

After traveling to different parts of the country, she reached Wardha Ashram. And he met Vinobha Bhave.

She learned Hindi language and reached Chanoda Ashram in the year 1941. After learning to weave Khadi, he decided to live in the mountains.

Gandhi started the Quit India Movement in the year 1942. During this period, the British government was arresting every person associated with the Congress.

Sarla Ben used to help people engaged in the freedom movement. Along with food, she used to do the work of delivering medicines and messages and giving legal advice.

However, due to her being a British woman, the British government did not arrest her. But the government kept an eye on them. And for not obeying the orders of the government, he was also sent to jail.

Venugopal says that he devoted all his energy to the welfare of rural women and protecting the environment. He also took part in Bhave’s Bhoodan movement to end gender discrimination.

He says, “When this world was not aware of the environment, then Gandhi and Kumarappa proposed it and Sarla and Meena Ben followed these ideals in their lives and showed it to the world.”

Writer P Kondala Rao writes in his book Foreign Friends of India’s Freedom, “Indians had an obligation to fight for the freedom of their country. But the American and British people did not need to work for the country’s independence. But such There were many foreigners who worked for India and the Indian people should be thankful to them.”

Who is ‘Kalicharan Maharaj’ who abused Mahatma Gandhi?

Salman reached the stage after taking off his shoes to pay tribute to Balasaheb Thackeray, fans liked the video