Who will be the replacement of Duplessis-Chahar for CSK in IPL 2022, Irfan Pathan suggested name
Advertisement 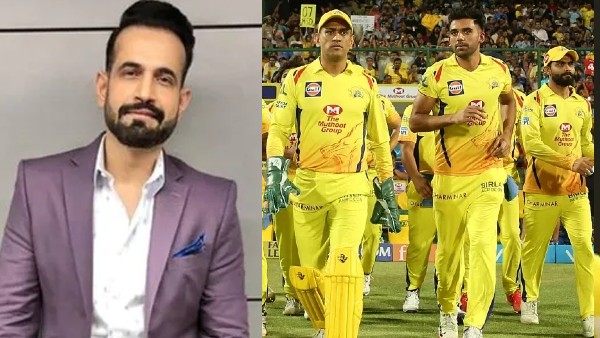 new Delhi. Now just 5 days are left for the start of the 15th season of the Indian Premier League, whose first match will be played between Chennai Super Kings and Kolkata Knight Riders. Before the start of the tournament, the troubles for the defending champions Chennai Super Kings are not taking the name of lessening. Due to the injury of the team’s fast bowler Deepak Chahar and the departure of many old players this season, it is not less than a challenge for him to prepare the playing 11.

Rituraj Gaikwad is there to open the innings for CSK this year but since Faf du Plessis moved to RCB, fans are worried about his replacement as to which player will be seen replacing him in the playing 11. According to experts, the CSK team will be seen playing on its old template this year as well, with an Indian batsman opening the innings with a foreign opener.

Read more: What will be Delhi’s challenge in IPL 2022, head coach Ricky Ponting revealed about the season

Apart from Conway, who can start Para?

If this happens, then the team of Chennai Super Kings has the name of New Zealand’s star batsman Devon Conway, who is associated with CSK this season for an amount of one crore. Meanwhile, former India all-rounder Irfan Pathan, while talking on Star Sports’ show Game Plan, said that CSK have two options, but which one would be better to open the innings with Gaikwad. During this, Irfan Pathan told CSK apart from Conway as the ideal option, whom the team has included in its camp for Rs 2 crore during the auction.

“CSK have two options, the first is New Zealand opener Devon Conway, who gives you a little bit of comfort. The pitches at Wankhede and CCI in Maharashtra are much better, when you play here, it is very easy for foreign players to play here. But if you don’t play Conway, you have the option of Uthappa, who is a very good opener.

Irfan Pathan, while giving his opinion on both the options during this time, also said that if Chennai Super Kings open the innings with Uthappa, then they will benefit more because then they have a chance to give place to Sri Lanka’s mystery spinner Mahish Teekshna in the team. Which will be bought by the team for Rs 70 lakh.

“If Conway doesn’t play and Uthappa opens the innings, you will have a chance to include Mahish Teekshna in the playing 11 from the beginning. Obviously you will go with more foreign players but on Maharashtra pitch you need extra speed, so you can give Adam Milne a chance. You also have Bravo and Moeen Ali, so all four of your slots will be filled. But if you feed Conway, you will not be able to give chance to Mahish Teekshna who is a mystery spinner.

It is worth noting that the team of Chennai Super Kings has suffered a double blow this time, where its fast bowler Deepak Chahar is unable to participate for the first 4 weeks of the tournament due to injury, while Shardul Thakur is also from the team. have gone away. While the CSK team has given a chance to U-19 World Cup superstar Rajyavardhan Hangrekar during the auction, Pathan believes that this young player has the ability to fill the gap of Deepak Chahar.

He said, ‘If you don’t even have Shardul Thakur, then it is necessary for you to find a replacement. They have a player who is still young and new-Hangrekar, you know how much talent that young player has. If a youngster had gone to another team, I might have been a little upset but he has a captain in Dhoni, who stands behind the stumps and makes things easy for the young players. So I think he has found a replacement for Chahar.

CSK should give a chance to Hangrekar

It is noteworthy that Deepak Chahar suffered an injury in the third T20 match played during the India-West Indies series, after which he has been ruled out of the first half of the tournament. However, Pathan believes that the CSK team will have to give Hangrekar a chance till Chahar returns and he can do the work Chahar used to do for him.

He said, ‘Obviously it is not easy to compensate for the skill and talent that Deepak Chahar brings with him. Along with swinging the ball, he also takes early wickets in the beginning. As soon as he is fit, he will be seen making a comeback in the team’s playing 11 but till then he will have to repose faith in Hangrekar. I think he is someone who has a lot of talent.

Hurley-Warne love story was like a T20 match, Liplock’s picture created a ruckus

Chris Gayle is the hero of IPL, this record has not been broken since last 9 years