Whom did Russia defeat on this day? Know what is Victory Day
Advertisement 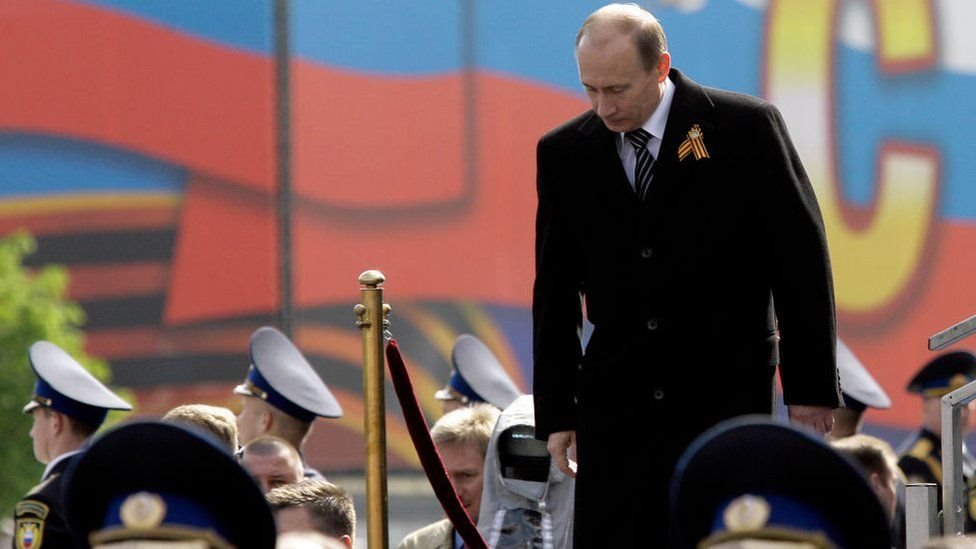 For the past few years, Victory Day, celebrated on 9 May in Russia, has acquired the status of an annual event.

On this occasion, military parades are organized in other cities including Moscow, the capital of Russia.

This is the date when Nazi Germany was won in World War II.

Victory Day under Vladimir Putin has become an occasion to show the might of the Russian army and military equipment, as well as to remember the Russian soldiers who died during World War II.

27 million Soviet civilians were killed in World War II, which was the most casualties in any country. The Russians remember this war as the Great Patriotic War.

This year this event has its own importance.

Russia, which liberated Europe, has been waging a war against its own neighbor Ukraine for months and so far has not achieved any military success that it can celebrate.

Russia’s stand at UN changed, but ‘what next’ eyes are now on ‘Victory Day’ parade

Why did the Pope and the Russian cleric come face to face over the Russo-Ukraine War?

The regiments that played a key role in the war would parade in front of senior Russian military officers and President Putin. On this occasion, President Vladimir Putin will deliver a speech from Red Square, which will be all eyes so that Russia’s next step can be guessed.

Putin often issues messages expressing his intentions on this occasion.

Victory Day parades used to happen occasionally during the Soviet Union. In 1995, President Boris Yeltsin revived the event once again on the 50th anniversary of the victory over Nazi Germany.

After this, Vladimir Putin made it an annual event in the year 2008 and started showing military equipment.

Russian identity is largely carved against the backdrop of Victory Day, with school books and history books depicting Russia as Europe’s wartime liberator.

Ammon Cheskin of Glasgow University says, “Even in a normal year, Victory Day is an opportunity to show Russian power, Putin’s control and influence. And this year it increased.”

Who is Putin’s ‘Girlfriend’, who is called ‘Secret First Lady’ of Russia

Why Russian citizens are moving to Dubai after the Ukraine war

What can Putin announce?

The speculations that were being made about the announcements related to the end of the war campaign have been denied.

There are reports that Putin will declare a full-fledged war on this occasion or that he will announce that the Russian men will go to the front in this war.

However, Russian Foreign Minister Sergei Lavrov has said that the Russian military will not artificially alter its operation keeping in mind any particular date.

Due to heavy losses to Russia in Ukraine war, big announcements can be made on this occasion. However, the decision to put the entire army on the battlefield may not be taken.

In the last few weeks, many such advertisements have come up on job websites. In these, there has been talk of creating opportunities for people expert in barricades.

But such a move can give a blow to the popularity of the President and probably the day of 9th May will not be the right time to make such an announcement.

China’s loss or gain from the war in Ukraine

Putin celebrated his victory in front of thousands of spectators at the Black Sea port of Sevastopol after the annexation of Crimea in 2014.

After this, in a speech given on the occasion of Victory Day in Red Square, he talked about defeating fascism.

Ernest Wiszkiewicz of the Center for Polish-Russian Dialogue and Understanding says, “The main objective of this year was to declare a victory that was supposed to happen in February. They are preparing a PR stunt for Monday. Because Russian Citizens need to show that the specific military operation they’re hearing about has yielded something.”

And instead of celebrating the overthrow of the Ukrainian government, the Russian government must be satisfied with the occupation of most of Mariupol’s territory.

The city of Mariupol may have been devastated, but Russia has repeatedly talked about de-nazification and demilitarization of Ukraine. The Azov battalion can be claimed to be defeated, which Russia has wrongly portrayed as a Nazi force.

This will be echoed during Victory Day, to celebrate the victory in World War II.

Nabiullina, Putin’s most special banker, who tells ‘Mann Ki Baat’ with her clothes

A picture describing the condition of the city of Mariupol

claim to stand against the Nazis

Olga Irisova, co-founder of the analysis organization Riddle Russia, says, “In Russian cities and regional capitals we can see symbols of Victory Day. Normally these symbols refer to 9 May 1945, but this year it is 1945. /2022. So they are trying to show the people that they (the Russian government) are once again taking a stand against the Nazis.”

There will be no Victory Day parade in the city of Mariupol due to security concerns.

Denis Pushilin, a Russian-backed leader in the region, has said the parade will have to wait until Mariupol becomes part of his so-called Donetsk People’s Republic.

However, some general events will be organized to celebrate. And they can be featured prominently in the coverage of Russian television.

Many big personalities have come to this city before 9th May.

These include a team led by Russian TV spin doctor Vladimir Solviev and the president’s deputy chief of staff, Sergei Kiryenko.

Why is OPEC not reducing the skyrocketing crude oil prices?

What will be seen in the Victory Day Parade?

The parade on Red Square is also a way of showing military equipment. This is a chance for the Russian government to show off its new weapons.

In 2015, the Armata T-14 tank was shown on the occasion of the Victory Day parade.

But due to not being seen in the war with Ukraine, all eyes will be on it. Because it is still not ready for war.

Ukraine says it has destroyed more than 1,000 Russian tanks that were relatively less modern during the war.

During this, Russia’s newest tank T-80BVM and Pantshir-S1 anti-aircraft missile system can be seen. The performance of the Russian Air Force in the air will remain as before, which will include 77 aircraft and helicopters.

The Russian Air Force will show the formation of the English language letter Z in the sky, the controversial symbol adopted during this war. Preparations are also being done for the last few days in the sky of Red Square.

Afghan interpreters want to settle in Canada, but will the Taliban let go?

Foreign guests will not come this year. According to the Russian government, the reason for this is not to hold an important event on the 77th anniversary.

Olga Irisov says that whatever messages are being issued on the occasion of Victory Day, they have been crafted keeping in mind the Russian people.

The Russian government has been able to arouse strong emotion among the people because of the stories of the fierce struggle against the Nazis in World War II, as most Russians have lost a family member or relatives in World War II.

On this occasion, programs will be held in many cities of Russia. But in neighboring countries, the importance of May 9 is decreasing.

Ukraine has suffered heavy losses in this war. A recent opinion poll has revealed that instead of victory, this day should be celebrated in the memory of those who have lost their lives in this war.

Kazakhstan has canceled its military parade for the third year in a row and Latvia has declared it to be a day of remembrance for those killed in the Ukraine war.

‘I cook food once to save gas, have to run cylinder for two months’

Why did the Pope and the Russian cleric come face to face over the Russo-Ukraine War?

Scindia was furious when Indigo stopped a disabled child from traveling, said- zero tolerance for such attitude