Why Payal Rohatgi clashed with Kangana Ranaut on 'Lock Up', Bollywood queen said - it is better if you do not tell your views
Advertisement 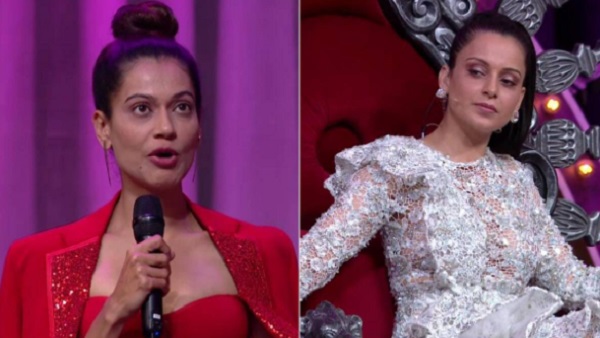 Host’s domineering face in ‘Lock Up’

A heated argument in the latest episode of ‘Lock Up’

A new promo of Lock Up has been posted on social media by ALT Balaji. This post is a new promo of the episode aired on Saturday night from the Instagram handle of ALTBalaji. In the beginning of the video, Kangana has raised questions about Payal Rohatgi’s leadership ability. Kangana told actress Payal that “You who walk around with such a flag ‘I am a leader, only I will speak’, that’s exactly the point. A leader should not do this.”
After this, now in the new episode, Kangana Ranaut is seen slamming Payal Rohatgi. She is seen scolding Payal.

Kangana narrates the judgment on the weekend

Actually, the reality TV show Lockup Ka Weekend i.e. Saturday’s show goes by the name of Judgment Day. ‘Lock Up’ is a prison-based reality show that airs on ALT Balaji and MX Player on all days of the week. Saturday is the Judgment Day of the show. On this day, the host of the show, Kangana Ranaut gives her judgement based on the assessment of the potential of the contestants. The show is streamed on the last day of the week i.e. Saturday with Judgment Day episodes at 10.30 pm.

So Kangana reprimanded this matter

In this, the competence of the participants is assessed. On Saturday’s show contestant Payal Rohatgi tried to explain to the show’s host Kangana Ranaut what a leader meant to her, Kangana stopped and scolded her. Kangana told Payal that you don’t tell your thoughts, understand? You are not going to tell me the definition of a leader. Then Payal further said that I am a leader for myself. To this, Kangana replied that there is such a leader who is a leader only for himself. What kind of foolishness is this?

Viewers are reacting to the promotion post of the show

After this Payal tells Kangana that she is free to choose any other leader in her place. After which both of them got into a heated argument. Payal Rohatgi said that you will not tell me who to leave and who to keep. Payal even told Kangana that this show is not yours. During this, there was a lot of heated argument between the two. Many unique comments are coming from the audience on this promotion post of ALT Balaji. Some have called Kangana Kangana on fire, while some have told Payal to talk without respect.

Dhanush appeared for the first time after separating from Aishwarya, made public appearances with both sons