Will Smith Once Slapped Prankster Who Tried To Kiss Him On Red Carpet; Accidentally Punched Actor In The Jaw
Advertisement 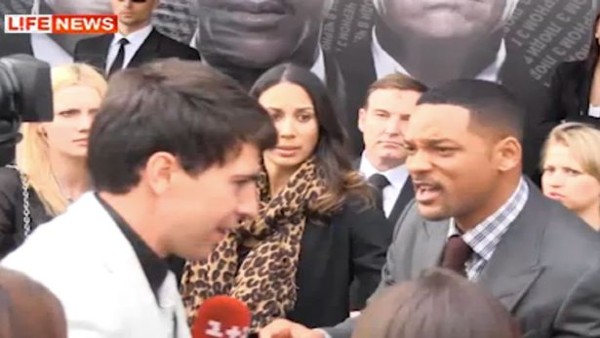 Men In Black 3
in 2012. For the unversed, a Ukrainian prankster by the name Vitalii Sediuk had embraced Smith on the red carpet and then kissed him on both cheeks. However, Smith, 53, promptly pushed the guy away and then slapped him on the cheek. He even shouted: “Hey man, what is your problem?”

Will Smith was embroiled in controversy during Sunday night’s Oscars when he stormed on stage after his wife Jada Pinkett Smith was mocked by the comedian Chris Rock. Jade, who suffers from alopecia, looked visibly upset after Chris joked about him being excited to see her in

GI Jane 2, a film in which Demi Moore appeared with a shaved head. The actor then decided to stand up for his wife by marching towards Rock and gave him a smack across the face. He then returned to his seat and shouted: “Keep my wife’s name out your f***ing mouth.”

The latest Oscars controversy has resulted in a similar incident from a decade ago gaining traction on social media. The video of the Ukrainian prankster trying to kiss the

Fresh Prince
star has gone viral on the internet.

It must be noted that Smith had later laughed about the incident and told another reporter: “He tried to kiss me on the mouth. He’s lucky I didn’t try to sucker punch him. Sorry, I said that on camera.” Meanwhile, it must be noted that the Ukrainian prankster in question has since gone on to target many Hollywood bigwigs including Adele, Bradley Cooper, Leonardo DiCaprio, Brad Pitt and Kim Kardashian. However, he later apologised for his actions.

It’s not just slapping but a fellow actor had once got ‘accidentally’ punched by Will. In January last year, Marvel actor Anthony Mackie said on

The Jess Cagle Show
that he bumped into Smith at a party in Budapest. Explaining what happened, he shared: “I’m on stage with Will Smith doing a concert. I’m losing my mind. Right? So, the cake comes out, we bring the cake out, Will Smith sees me and he goes, ‘Hey, Anthony Mackie.’ I’m like, ‘Will Smith knows my name.'”

Anthony went on to state that there was a miscommunication and he ended up getting punched in the jaw. He went on to add, “So, I go to like high five. I don’t know what I was trying to do, but like I was trying to hug him and he thought I was coming in for like a high five. So , he like tried to grab my arm and he punched me in the jaw so hard. Like he hit me with a right cross so hard. Then he grabbed me and he’s like, ‘you’re good?’ I was like, ‘I think so. I think we’re in a fight, are we in a fight?’ He’s like, ‘no, no, I’m sorry.'”