With your entry, this time there will be a triangular contest of three models in Himachal elections!
Advertisement 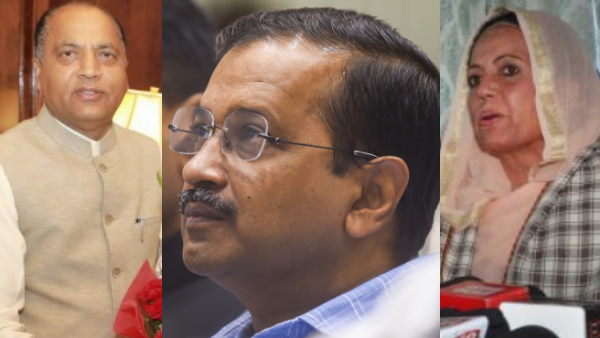 Shimla, May 5. Due to the ongoing preparations for the elections to be held in Himachal Pradesh later this year, this time there is a possibility of a triangular contest in the state. This time due to the Aam Aadmi Party being in the fray, the equations of both the BJP and Congress have gone haywire. This is the reason that this time the election campaign has started in the state only six months back. However, earlier in the state, there has been a contest between the BJP and the Congress. And both the parties have been swapping power. But this time the situation has changed and there are chances of a triangular contest. Due to this many leaders are seen worried about their political future.

On one hand BJP is busy wooing people in the name of model of development of Prime Minister Narendra Modi, while Congress party is talking about Virbhadra Singh model. At the same time, the Aam Aadmi Party is busy promoting Arvind Kejriwal’s Delhi model and is alleging that the model of development in the state has been a complete flop under the BJP rule. Due to which there is disappointment among the people in spite of having BJP governments in the state and at the Centre. AAP has given a slogan for its change.

BJP has made it clear in the state that this time elections will be fought under the leadership of Chief Minister Jai Ram Thakur. Thakur has also got the green signal from the central leadership. Thakur’s organization and government have been put on hold due to her proximity to the party’s national president JP Nadda and her opponents have been battered. But on the other hand, neither the Aam Aadmi Party nor the Congress party has announced their CM faces. Due to which both the parties have not yet decided under whose leadership the election will be fought.

The ruling Bharatiya Janata Party claims that the state is getting the benefits of the BJP governments in the country and the state. The development of the state has gained momentum due to the double engine government. Chief Minister Jai Ram Thakur has made it clear that this time BJP will seek votes from the public in the name of development. He said that the government has made all-round development of the state during its tenure of four and a half years. So people are in the mood to bring this government back to power. He said that for the first time in the history of the state, it has been decided by the government that zero bill will be charged from the electricity consumers for electricity consumption up to 125 units per month. He said that the State Government has also decided to give 50 percent rebate in fare to women passengers in Himachal Road Transport Corporation buses.

At the same time, Congress MLA from Shimla Rural Vikramaditya Singh said that former Chief Minister Virbhadra Singh was the architect of Himachal’s construction. People still remember him today. So this time the Congress party will take the Virbhadra model among the people. People are ready to remove this government from power. People are upset with the present government.

On the other hand, the Aam Aadmi Party has also given edge to its election campaign. And AAP is talking about bringing Kejriwal model to Himachal in its election meetings. Senior Aam Aadmi Party leader Satyendar Jain has said that in this year’s Himachal Pradesh Assembly elections, there will be a direct contest between his party and the Bharatiya Janata Party, in which AAP will win. Satyendar Jain said that few months are left for Himachal Pradesh Assembly elections. The Chief Minister of Himachal Pradesh is now going from place to place, inaugurating projects and telling people what his government will do if it comes to power. They should seek votes based on the work done by their government. Jain also claimed that there will be a direct contest between the Aam Aadmi Party and the Bharatiya Janata Party in this assembly election, while the Congress is not in the contest, it is out. There is discord in Congress.

Aam Aadmi Party’s Himachal’s co-in-charge and Delhi MLA Ajay Dutt said that the people of Himachal have made up their mind to oust both the BJP and Congress parties from power. He said that the improvement of schools and administration of the state was done by Kejriwal model. It just might be. He said that the party would prepare Himachal model on the lines of Delhi model of development.

Bengal better than other states, don’t blame the victim girls here like in UP: Mamata Banerjee