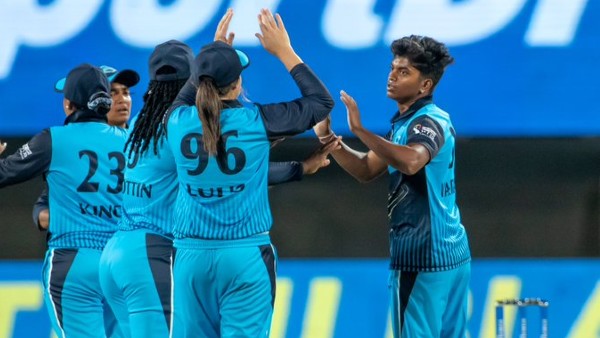 New Delhi.
The league stage of the 15th season of the Indian Premier League has come to an end and the Women’s T20 Challenge is being organized before the playoff stage starting from May 24, the last time the tournament is being played between three teams in the T20 format. The BCCI has already announced that it is going to start organizing the women’s IPL between 6 teams from next year, due to which this will be the last time that the short format of the women’s IPL will be seen.

In view of this, the first match of the Women’s T20 Challenge was played between the Supernovas captained by Harmanpreet Kaur and the team of Trailblazers captained by Smriti Mandhana. In which the team of Supernovas decided to bat first after winning the toss and scored the biggest score of this tournament on the strength of the batting of Priya Punia (22), Deandra Dotin (32), Harleen Deol (35) and Harmanpreet Kaur (35). .

In the first match of the Women’s T20 Challenge 2022, the team of Supernovas scored 163 runs in the allotted 20 overs and got all out. Chasing 164 runs in reply, Trailblazers’ team made a quick start with a partnership of 39 runs in 5 overs and crossed the score of 60 runs in 7 overs.

Captain Smriti Mandhana (34), Jemima Rodriguez (24) and Haley Mathews (18) played the best innings for the Trailblazers but the match took a turn in the 8th over and the Trailblazers team lost their 7 wickets within 23 runs and the match got out. This upheaval for the Supernovas was done by Pooja Vastrakar, who took 4 wickets for just 12 runs in her 4 over spell and became the first bowler to take 4 wickets in this tournament.

Read more: Rishabh Pant became a victim of fraud of 1.63 crores, was robbed by the hobby of expensive watches

Meghna Singh (1 wicket), Sophie Ecclestone (1 wicket) and Elana King (2 wickets) also contributed with their brilliant bowling and did not allow the Trailblazers to return. At the same time, Priya Punia (2 catches) and Harleen Deol (2 catches) also played an important role in winning their team by taking excellent catches in the fielding. Due to this, Trailblazers’ team could score only 114 runs in 20 overs for the loss of 9 wickets and Supernovas achieved a big victory of 49 runs.

If rain becomes villain in Kolkata, then this team will reach the final without playing Qualifier 1… know the full equation

‘If it had done so, Chennai could have reached the playoffs’, Ravi Shastri told where did CSK go wrong in IPL 2022