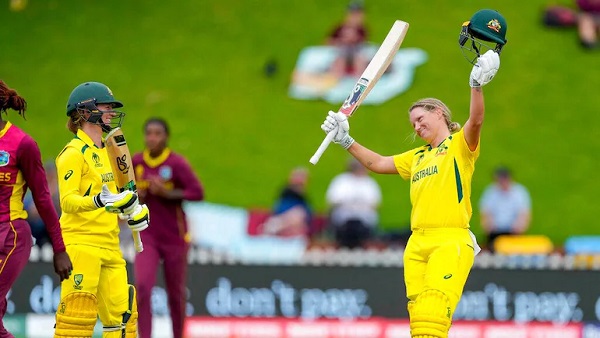 Talking about the match, in the semi-finals, West Indies won the toss and decided to bowl first. But before the start of the match, rain disturbed due to which the match was reduced to 45-45 overs. Batting first, Australia scored 305 for 3 in 45 overs. Captain Alyssa Healy’s bat looked blazing, who scored 129 runs in 107 balls. Apart from this, Rachel Haynes also shocked the hopes of Windies by scoring 85 runs in 100 balls. The two shared a 216-run partnership for the first wicket. Then in the last moments, Beth Mooney played an innings of 43 runs in 31 balls to take Australia’s score to 305 for 3 wickets.

Windies team could not survive

Then the Windies women’s team came out in reply and were bundled out for 148 runs in just 37 overs. Only captain Stephanie Taylor was seen struggling, who scored the highest 48 runs. Except Stephanie Taylor, none of the players could stay on the pitch for long. His 6 players could not even reach double digits.

Windies’ first wicket fell when the score was at 12. Rashda Williams went to the pavilion without opening the account. After this Diandra Dottin scored 34 runs in 35 balls and returned to the pavilion. The third blow to the Windies came in the form of Haley Mathews, who scored 34 runs and she became the victim of Jonassen. After losing these three important wickets, the Windies team could not make a comeback and then lost all their wickets for 148 runs.

Babar Azam can get so many crores in IPL, Shoaib Akhtar claimed

Sanju Samson roared like this in the first match of the last 5 seasons, see interesting figures