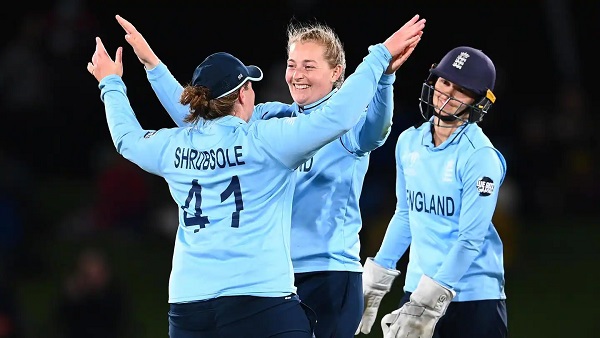 South Africa won the toss and invited England to bat first. However, the England team did not start well as they lost the first wicket on 10 as Beaumont managed to score 7. After this, captain Heather Knight, who came at number three, also went on scoring 1 run and the number four batsman Nate Siever (15) also lost his wicket early. With this, three players were dismissed for his 77 runs. However, Daniel Waite then shared a 49-run partnership with Amy Jones. Jones got out after scoring 28 runs.

After this Daniel and Sophia Dunkley put together a partnership of 116 runs. During this, Waite completed his century, while Dunkley scored a half-century. While Sofia scored 60 runs in 72 balls, Brunt could score 9 runs. Then Alston scored 24 runs in 11 balls with the help of 5 fours, taking the team’s score to 293 for 8 wickets in 50 overs. Shabnim Ismail took three wickets in the bowling for South Africa, while Kaap and Masbata Klas took two wickets each.

In response, the South Africa team had a very poor start and they lost their opening pair wickets on the score of 8. While Lizelle Lee could score 2 runs, Laura Volvardto could not even open the account. After this, Lara Goodall (28) and Sune Loos (21) tried to handle the team together, but when their partnership broke up, the African team was completely devastated. Soon the entire team was reduced to 156 runs in 38 overs. England bowler Sophie Eccleston took 6 wickets for 36 runs.

Know when will be the final match

KKR vs RCB: Why was Venkatesh given the 19th over, Shreyas Iyer gave the reason

There is a wave of happiness in the camp of Punjab Kings, the swashbuckling batsman joined the team camp before the match of KKR