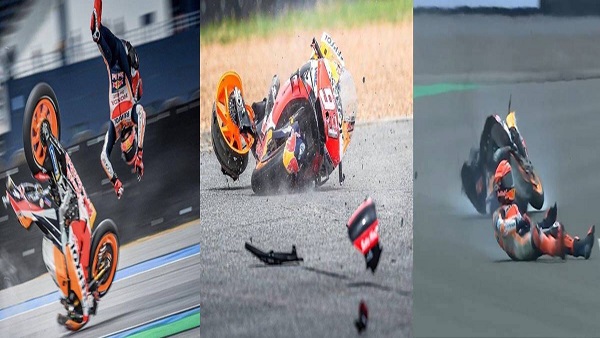 It so happened that this accident happened during the warm-up match of 6-time world champion Marc Marquez’s bike. The bike had fallen several meters while flying in the air and Mark also went away dragging on the ground. However, he got up safely and started walking outside the track. Mark has been ruled out of the tournament due to this accident. At the same time, the video of this accident is becoming very viral on social media. People are surprised that such a terrible accident happened, but still the driver stood up. Some people are also sharing it with a caption like miracle.

In the video, you can see how Mark’s bike lost its balance due to a tire failure at a turn on the track, after which he slid to the left. Due to this, the riders were having trouble making grip. When the accident happened, the speed of the bike was 180 kmph. Mark is currently hospitalized, but he has been ruled out of the tournament. Mark races for Honda.

The Honda team put out a statement on social media, which said, “Marc Marquez has been declared unfit after being examined at a local hospital and by circuit staff and doctors.” Marquez had already suffered a grueling weekend, after two accidents during qualifying on Saturday. Miguel Oliveira won the Indonesian MotoGP by finishing 2.205 seconds ahead of reigning world champion Fabio Quartaro, who started from pole position. French biker Johann Zarko finished third, finishing 3.158 seconds ahead.

Knew Rajasthan Royals would pick me in IPL 2022 auction: Ashwin