World Cup: Didn't get the advantage of a strong start, India set Bangladesh a target of 230 runs
Advertisement 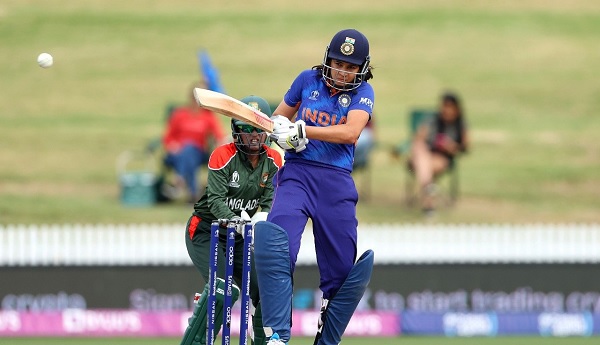 New Delhi, March 22:
The Indian cricket team is playing an important match against Bangladesh in the ICC Women’s World Cup. Team India’s performance in the World Cup has not been special so far and they have managed to win only two matches in five matches, but the way is still open for India to reach the semi-finals. In such a situation, in the ongoing match against Bangladesh, Team India has no option but to do or die and the Indian cricket team, batting first, has given Bangladesh a target of 230 runs.

The innings of the Indian women’s team was reduced to a score of 229 runs for the loss of 7 wickets in 50 overs. The Indian batsmen got off to a good start when Smriti Mandhana and Shafali Verma put on a quick 74-run opening partnership but on the same score, India lost 3 wickets and the whole story turned. Mandhana fell victim to Nadia Akhtar after playing an innings of 30 runs off 51 balls. After that, the pace of Indian runs also stopped after Saifali Verma, who was dismissed for 42 runs in 42 balls, returned to the pavilion.

After the dismissal of both the opening batsmen, captain Mithali Raj made a golden duck on the ball of Ritu Moni without opening any account, due to which the pace of runs of the Indian batsmen was severely curtailed. Harmanpreet Kaur played a slow innings of 14 runs off 33 balls and was run out.

During this, Yastika Bhatia continued to play at one end and was supported by wicketkeeper Richa Ghosh in the lower order, who scored 26 runs in 36 balls, but soon after that the wicket of Yastika Bhatia also fell, due to which India was in a time crisis. But in the final moments, Sneh Rana played a cameo of 27 off 23 balls to help India give some challenging scores.

For India, Petition Bhatia scored 50 runs in 80 balls while Ritu Moni managed to take three wickets for 30 runs in 10 overs among Bangladeshi bowlers.

IPL 2022: This Zimbabwean bowler got entry in Lucknow Super Giants instead of Mark Wood