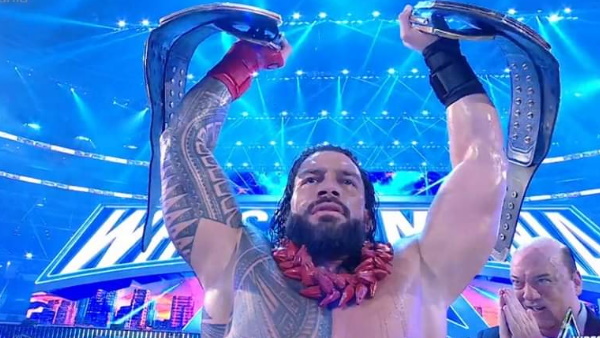 Lesnar lost in a fight after the ring

Roman Reigns managed to defeat Lesnar in a tough match at the ATT Stadium in Arlington. In the final moments of the fight, Reigns slammed Lesnar out of the ring. Roman Reigns defeated Brock Lesnar for the first time in his career at WrestleMania. In this match, Superman Punch, F-5 and Kimura Lock were seen from Lesnar’s side. On the other hand, Roman Reigns used Superman Punch and Spear.

Roman Reigns wins WrestleMania for the second time in a row

Roman Reigns won the main event of WrestleMania for the second time in a row as the World Champion. It has been more than 581 days since he became the champion. The match ended abruptly between the two wrestlers. Compared to the previous match between the two wrestlers, less drama was seen in this match. WrestleMania Sunday began with the unannounced retirement of one of the most influential and iconic Superstars in WWE history, Triple H.

WWE Hall of Famer Triple H announced his retirement last month after suffering a heart-related illness in September. He received tremendous applause from the audience as he walked down the aisle of WrestleMania on Sunday. He climbed the turnbuckle to give WWE fans his trademark salute. At the same time, in another spectacular match, Edge won a spectacular victory against AJ Styles.

‘He has suddenly grown up’, Vikram Rathor admires this Indian cricketer

DC vs GT: Delhi scattered like a pack of cards in the last overs, Ferguson won Gujarat