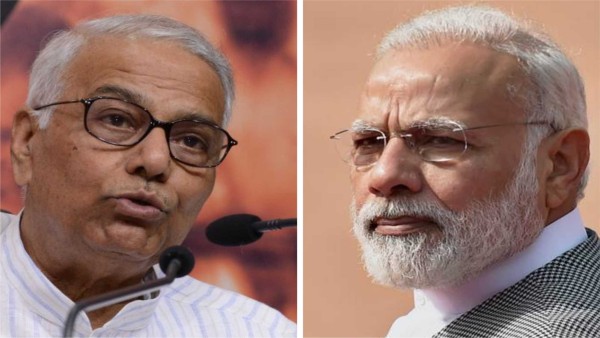 New Delhi, March 20.
Hitting out at the Modi government, former Finance Minister Yashwant Sinha said that the fiscal situation is getting affected badly due to the huge expenditure on welfare schemes by the Narendra Modi government. He said the fiscal deficit has reached an unusually high level. Sinha said in an interview to a media channel that it is surprising that no one is seeing this fiscal deficit, not even the government itself.

Sinha, senior vice-president of TMC, said, “Modi government is spending huge amount on welfare schemes, including free food scheme and everything else, but it has messed up the financial situation. The fiscal deficit has touched unusual proportions even according to the government’s unreliable figures.

The country’s fiscal deficit is estimated to be 6.9 percent of GDP in the current financial year 2021-22. Earlier it was estimated to be 6.8 percent. Sinha alleged that today the government’s economic policies are decided on the basis of whether they will help it win elections or not.

He said that on one hand welfare schemes are being run for the poor and on the other hand select corporates are making windfall profits. This is something happening about which nobody in the country is worried. He said that this is a clear imbalance between strong fiscal policies and strong economic policies and this is the reality of today.

Responding to a question, he said the Indian economy would have to deal with the challenges of inflation and growth. Asia’s third-largest economy is projected to grow at 8.9 per cent in the current fiscal, lower than the government figure of 9.2% previously estimated. Sinha, who was a big critic of the Modi government, said that today the economy needs investment from the government as well as the private sector, which does not seem to be happening. Government is not increasing investment, apart from this private investment is also weak. Sinha said investment is weak because of the increase in interest rates. In the absence of investment, the Indian economy will not be able to progress. Regarding the impact of the Russo-Ukraine war on the Indian economy, he said that our economy largely depends on the import of crude oil. In such a situation, the economy will be affected on the inflation front.

Let us tell you that retail inflation has reached an eight-month high of 6.07% in February, which is more than the Reserve Bank’s satisfactory level for the second consecutive month. While wholesale price-based inflation rose to 13.11% due to hardening of crude oil and non-food articles prices. Significantly, Shaywant Sinha was included in the cabinet in the government of former Prime Minister Atal Bihari Vajpayee, but after differences with the top leadership, he left the BJP in the year 2018.

Now Covishield will be set up at a gap of 8 to 16 weeks, NTAGI recommends